If we can’t write diversity into sci-fi, then what’s the point? You don’t create new worlds to give them all the same limits of the old ones. – Jane Espenson

In almost 40 years of existence, Star Wars has done some good work in terms of diverse characters, though there is still room for improvement, even in more recent creations. 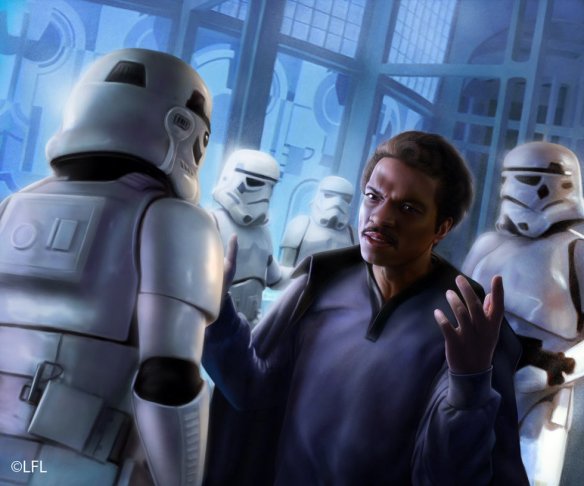 I grew up with favorites such as Leia Organa, Obi-Wan Kenobi, Han Solo and Lando Calrissian. I fell in love with Mara Jade when reading Timothy Zahn’s Heir to the Empire in the early 90s. I jumped up and down when we got Mace Windu, Bail Organa and Padme Amidala in the Prequel Trilogy. I can’t wait to see the new trio in Episode VII, as well as the new and returning characters.

Star Wars has had recurrent missed opportunities with depiction of disability. So far, most romance and characters presented were straight. I hope to see more characters of colors and other species have important roles in the future, as well as even more compelling female characters of all ages.

Yet, the franchise has done good things since it was created. It was what prompted me to return to my collection of essays A Galaxy of Possibilities: Representation and Storytelling in Star Wars, and revise it, as well as add two new chapters. Tackling the whole universe would be a lifetime work, but the following essays aim at shedding some light and discuss aspects of diverse representation in the franchise: 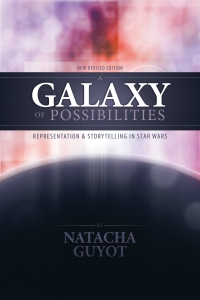 Cover designed by Jennifer A. Miller.

The New Revised Edition will be available in Kindle format on September 9 (print version TBA later this year), on all Amazon sites, including Amazon US, Amazon UK, Amazon Canada. You can also find the book’s Goodreads page here. I’m always happy to connect with my readers!

What about you, fellow Star Wars fans? What aspects of diversity do you think were well done in Star Wars and which ones do you hope to see improve in the future?

So, I stubbornly refuse to post the premium stuff on Thursdays from here on out. Also. I’m committed to promoting our contributors, our friends, and good creative work in general. Most of the internet-folk seem to be reading other things on Thursdays, and that’s fine.

Taking a day off every week makes a certain amount of sense for us, because man. It burns hot around this place sometimes. If you wish to hang out at other blogs on Thursdays, I shall suggest blogs to you.

So give Science Fiction, Transmedia, and Fandom the #bloglove today.

You want to stop by here on Saturday. Natacha’s got a #StarWars Saturday post for you this week, and she is bringing the awesome.

Here’s a post by Hannah Givens from January of 2014. Are Star Wars Characters Interesting? It stands out in my mind as one of the best posts I read during my first few months of blogging, and since most of you probably didn’t see it the first time around, you should give it a look. And here’s a nice Star Wars-themed video I found to go along with it.

If I recall correctly, this conversation marks the point at which I started keeping up with Natacha Guyot and Rose Fischer — both of which are now friends and have contributed mightily to the blog in the last year. Talk about a stroke of good fortune.

Anyway, it’s a fabulous post. Give it a look!

The A to Z list is live. We’re #96. Use this link to register. Official announcement on Thursday.

According to this post, registration for the Blogging A to Z April Challenge opens tomorrow. I do not know what hour of the day the list goes live. If you have already decided to take the plunge, keep your eye on the it and get in as early as you can.

This is my personal survivor badge. Sourcerer needs one of these.

Our schedule is here and every day is taken. We will not announce the actual topics until it’s time for the reveal. You’ll notice V is reserved for a mystery blogger and Y is “taken care of.” Those letters will remain as-is until reveal day. I will have an official announcement later this week once I register and see where we land on the list.

Here’s the preview for this week. I won’t do these every week, but we are still in a state of transition, and we have a couple of posts coming this week that are a little out-of-the-ordinary. You’ll not want to miss either.

The first round of Feminist Friday discussions starts this week at Part Time Monster. The post is written and the spring schedule is here.

Next week, we kick off a seven-part series from Rose B. Fischer on a couple of animated series most of you are sure to remember. Rose’s series will run twice a month.