This one’s just for fun. The video quality is not the best, but it serves.

I mentioned earlier this week that I’m working on a guest post for my friend Hannah’s blog, Things Matter. The video is a large hint as to what that post is about, and keep in mind, Things Matter is, among other things, a history blog. So probably not about folk songs played by country bands.

Happy Weekend! Natacha‘s in the house with a #StarWars Saturday for you tomorrow.

If you’re into comics at all, you may have heard of Kamala Khan by now. She’s the new Ms. Marvel who’s running around breaking sales records and embiggening her way into our hearts. Up until now I’ve reviewed every issue on Things Matter, but as of today, I’m pleased to bring Ms. Marvel reviews straight to you, Sourcerer readers! 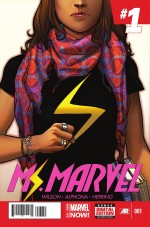 Of course, if you’re new to Ms. Marvel or comics in general, welcome! Kamala Khan is a Pakistani-American Muslim girl living in New Jersey, who receives shape- and size-changing powers in a Terrigen Mist incident. That means she’s an Inhuman, which is sort of like being an X-Man, but you’ll get all those details as you go. Her third collected volume was just released last week and goes all the way up to #15, so with those three volumes it’s super-duper easy to catch up to this point! The series is written by G. Willow Wilson.

Here’s a quick recap, spoilers for stuff up to now: Volume 1: No Normal establishes the character, her world, her conflict with herself but ultimate confidence, and awesome villain The Inventor (a cockatiel-cyborg clone of Thomas Edison). Volume 2: Generation Why is the main Inventor story arc, and introduces the Inhumans. Vol. 3: Crushed goes deeper into the Inhumans using Kamala’s short-lived relationship with a fellow Inhuman named Kamran who turns out to be a terrorist against the Inhuman royalty.

Most of these reviews won’t be this long, but now we’re ready for today’s issue!

Kamala is, understandably, pretty broken up about how Kamran turned out to be a villain. He was a hot nerd who shared not only her Middle Eastern heritage but also her superpowered secrets… Of course she’s upset. When the story opens she’s drowning her sorrows in hot dogs.

But then there’s a random planet looming over Manhattan! Crowds are fleeing into New Jersey, so Kamala jumps into action to help shelter her friends and family in her school and protect the place from looters. Once that’s done, she turns her attention to the threat at hand. We get a really lovely moment of doubt, though.

An experience like Kamala’s with Kamran can be so demoralizing, and then this strange planet thing is thrown at her, totally unexplained. She’s not sure she can handle it… by herself. I love that! She doesn’t doubt she can be a superhero, I don’t think she ever has, but over the course of this series she’s also learned about the value of team-ups with Wolverine and Lockjaw and her own supporting characters like best-friend Bruno.

Who’s the latest guest? The blurb promises the team-up we’ve all been waiting for, and I had no idea, but I bet you can guess, so I’m not gonna tell you! Find it in the big reveal, and I think I can promise next month will be amaaaaazing!

Finally, Adrian Alphona is back on art this month! He’d been away for a while, but Ms. Marvel achieves peak awesomeness when he’s drawing, because he includes so many hilarious sight gags and background jokes. This one’s my favorite from this issue:

See you next month!

Ms. Marvel #1 has recently entered its seventh printing. Seventh! That’s practically unheard of in comics, especially for a total newcomer like Kamala Khan. As Marvel.com puts it: “Marvel Comics presents the all-new MS. MARVEL, the ground breaking heroine that has become an international sensation! Kamala Khan is just an ordinary girl from Jersey City–until she is suddenly empowered with extraordinary gifts. But who truly is the all-new Ms. Marvel? Teenager? Muslim? Inhuman? Find out as she takes the Marvel Universe by storm, and prepare for an epic tale that will be remembered by generations to come. History in the making is NOW!”

Hyperbolic, perhaps… but seventh printing. Meanwhile, the series is still going strong at nine issues and a collected first volume. The critics, including me in my monthly reviews, are about as excited as Marvel seems to be. Why do we love Kamala? Well, it would be a…

I shared this early in the week and promoted it a bit. Saved the reblog for those of you who come around on the weekend. Read this. Please. Reasons:

1. If you identify yourself as a geek or nerd, claims are being made about your culture which you might want to sound off on.

2. If you like science fiction, you will love this!

3. Are you a technophile? This post discusses the 3-D printing of food, Iron Man armor, and shield technology.

4. Are you an international relations geek? If so take a look at the thread. You’ll find three IR geeks talking about world order issues and we would love to meet three more.

5. Inclined to do me a personal favor? This post is a collaborative effort produced by two of my favorite bloggers in the whole world. I will totally take you leaving a comment on the thread as a personal favor.

For this post, I collaborated with Hannah Givens, from Things Matter (which you should totally check out).  Our mutual love of international relations shines through everything we do, apparently.

Technological innovation raises some obvious questions. What kind of technology will humans use in the future? How will it work and what will it do for us? How will it change the way we do things? Those questions are, perhaps, at their most controversial in the realm of national security, where technology can kill (or protect) ever-greater numbers of people. Fortunately, geek culture is an oracle of war. Science fiction has been imagining the future for a long time now, and was already providing possible answers before national security experts even understood the questions.