Good day, everyone! I hope your week is going well. For this week’s post, I want to focus on another Batman villain the way I did the Joker many weeks ago. This time, I want to look at Mr. Freeze, Batman’s most underrated and sympathetic opponent.

Mr. Freeze (originally named Dr. Victor Fries and called Mr. Zero) was created in 1959 by Bob Kane, David Wood, and Sheldon Moldoff. At first, he was a somewhat ridiculous, generic ice villain, of which there were several in the Silver Age (the Flash’s Captain Cold being another notable example). And Mr. Freeze remained an unremarkable sometime foe of Batman for decades, despite a slight bump in popularity during the Adam West years based in no small part by portrayals by such esteemed actors as Eli Wallach. That is, until the 1992 episode of Batman: The Animated Series entitled “Heart of Ice.”

The animated version of Mr. Freeze (voiced by the late, great Michael Ansara) was an entirely new take on the character defined by his sorrow and his quest for vengeance against the company that pulled funding on his studies to cure his wife (then in suspended animation) of an undisclosed terminal illness. The resulting seizure of his lab by its big businessman owner (Ferris Boyle of Gothcorp in some versions) ended with Victor Fries being bathed in a cryogenic formula that drastically lowered his body temperature and made it nearly impossible for him to survive exposure to even the mildest environment without the aid of an armored suit.

END_OF_DOCUMENT_TOKEN_TO_BE_REPLACED

Good day, everyone! Today, I want to finish laying out my top ten favorite Marvel Comics characters. Here are numbers 6-10.

6. Wolverine – He’s the best there is at what he does and the man who just won’t die. For the longest time, he was as 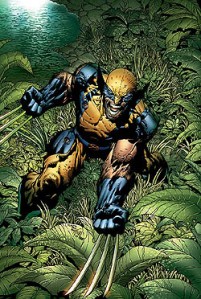 mysterious as the Joker, and a lot of fans were upset when writers gave him a concrete origin. I’ve found that knowing Logan’s true background, and that his real name is James Howlett, in no way diminish how I enjoy the character.

He’s powerful in ways other superheroes are not, and he never backs down from a fight. There’s more to him than the violence, too; he can also be a tender caretaker to fellow outcasts. If I had to offer up a couple of recent stories/series that really show off the strengths of the character, I would recommend Mark Millar’s Old Man Logan and Rick Remender’s Uncanny X-Force.

7. Cable – He’s one of those corny 90s characters that has gotten better with age. He’s a damaged soldier from the future who comes back in time to try to prevent the hellish events that eventually destroy his world. Sadly, very few people listen to him after he helps the X-Men defeat Apocalypse. As the (possible) future son of Jean Grey and Scott Summers (Cyclops), Cable (or Nathan Grey) has some of the greatest power potential of any mutant in the Marvel Universe. It is appropriate that people began to see him as a sort of Christ-figure in Cable & Deadpool from last decade, one of several series I talk about in some detail in my Top Marvel Stories Since 2000 post.

8. Rogue – I’m beginning to see that this half of the list is a bit mutant-heavy, which is interesting given the fact that I’m

not a huge fan of the state of the X-books at Marvel currently. Anyway, Rogue is one of my favorite characters in Marvel for several reasons—she’s my favorite of Wolverine’s “little sister” characters, she’s one of the few unashamed Southern superheroes, I grew up watching her on the old X-Men cartoon, and I’ve been into comics long enough to have watched her grow a great deal as a character. To get a better view of her in recent years, I recommend Mike Carey’s run on X-Men: Legacy and Rick Remender’s current run on Uncanny Avengers.

9. Age of Apocalypse Sabretooth, Spider-Man 2099, Morph and other Exiles characters – This one is a bit of a cheat, pulling in an entire group of characters. Exiles was a work of genius: plumb Marvel’s endless multiverse for alternate timeline versions of known characters (and many unknown characters), build a team out of them, and send them on missions to repair damaged timelines with the promise they can one day go home, Quantum Leap-style.

By using nothing but new and side characters from and in alternate universes, the writers of Exiles were free to shrug off the restraints of continuity and tell whatever stories they pleased. Unlike in most mainstream comic stories, the characters in Exiles could and sometimes did die on missions. I still have difficulty articulating the feelings I experienced throughout this series. Definitely check it out if you ever get the chance. Check out my most recent comics news roundup for pleasing information on Spider-Man 2099’s next adventure.

10. Victor von Doom – What’s a list of heroes without a villain? Dr. Doom is my choice. Doom can be cruel, but he is an honorable man, and this extends to many different versions of the character. I would argue that, deep down, he is a truly good person, but his arrogance and sense of noblesse oblige get in the way of him ever being purely heroic. Check out Mark Millar’s run on Ultimate Fantastic Four and Jonathan Hickman’s run on the original Fantastic Four to see what I mean.

And that wraps up my list. Thank you all for reading both parts. What do you think of this half? Who do you feel I’ve left off? Let me know your thoughts below. Don’t forget to support your local comic shops. Tweet me @quaintjeremy.

Happy new book day, everyone! Today, I want to examine (in general) Batman’s character development over the years. This will at once be generalized but multi-layered, and is inspired by a comment I’ve seen making the rounds of the hundreds of self-certified comics news outlets around the internet: that Batman is more like a Marvel character, and is effectively trapped in the DC universe.

That said, we need to define what differentiates a Marvel character from a DC character and how Batman might be more like one than the other.

Traditionally, Marvel characters are seen as more realistic and relatable on a human level; they are not the perfect, archetypal god-figures of the Golden Age of DC Comics. They have imperfections and doubts; they make mistakes. Some might argue that whenever a DC character demonstrates an insecurity or fails at something, the writers are effectively emulating Marvel. I’m not so sure this is the case.

Further, DC characters seem too perfect and hokey for some readers. Such fans might cite that Superman is too much of a Boy Scout, for example.

There’s always an edge, some worn-in grime, attached to Marvel characters, whereas DC characters always seem a little too clean and wholesome. Marvel’s characters, it can be argued, often go through more hardship in their development, rendering crime fighters that are not naïve when it comes to the realization that they may have to take lives in order to safeguard the public good.

So, where does Batman fit into all of this?

To say that either of the big two comics companies has a monopoly on any form of characterization is problematic, and possibly outright foolish. Where some fans might look at Wolverine cutting an opponent’s hands off as edgy and cool in a recent Marvel story, others may be compelled to bring up that Batman, in his original appearances in Detective Comics in the late 30s and early 40s, carried a gun and would often throw criminals off of rooftops.

Holding onto the idea of character development, though, this seems to imply that Batman has undergone more and better growth than his fellow DC characters. This is certainly true if Batman is the only character at DC you regularly follow or have any interest in reading.

I’ll be the first to admit I am a huge Batman fan, but I recognize that he isn’t the be-all, end-all of DC. And for those fans who might argue that Marvel is better at putting together morally complex, sympathetic villains (Dr. Doom and Magneto are awesome, after all), I challenge them to read Sinestro, Lex Luthor, or even the Joker (and many, many others) in greater depth.

In short, this has been a bit of a rant about the topic I started out with. I’d like to challenge fans to not fall into the natural sense of discrimination that fanboy tendencies sometimes lead to—be open-minded and willing to try out new things. Be willing to accept that the things you do not personally enjoy still have value. I recognize competing fandoms, but they need not divide us. We’re all nerds here, and we should be proud of it.

My comics picks for this week:

Guardians of the Galaxy #13

Serenity: Leaves on the Wind #3

Let me know your thoughts on this matter below, and don’t forget to support your local comic shops! As always, tweet me @quaintjeremy.