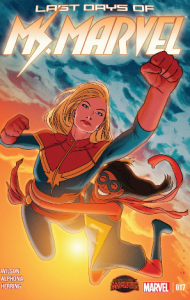 I didn’t want to spoil the big reveal at the end of Ms. Marvel #16, way back in June, but it’s on the cover now so what can I do? IT’S CAPTAIN MARVEL. Ms. Marvel’s hero and namesake, meeting Kamala Khan for the first time and I am SO EXCITED. 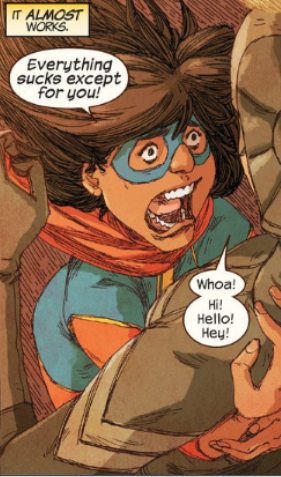 Captain Marvel explains about the planets in the sky. Apparently it’s what happens when realities are bumping up against each other, and Carol only came to tell Kamala that no one else is coming to Jersey City, Kamala will have to defend it on her own. But Carol agrees to stay and help rescue Kamala’s brother from Kamran, Kamala’s evil ex-crush.

Most of the issue is Carol and Kamala wandering around the city looking for Aamir, Kamala’s brother. Carol dispenses a lot of superhero advice, and it’s good advice — a step beyond what she’s learned from Wolverine and Lockjaw. It’s harder advice, and there are kittens involved. (I just hope the kittens come back, otherwise there may be crying involved. Those are the cutest kittens I’ve ever seen.)

Unfortunately, even though the advice is pretty okay, the dialogue is uninspiring. There’s no real personal connection between the two women, or if there is it’s one-sided. The final effect is just of a paint-by-numbers conversation, like Captain Marvel could’ve given the same advice to any young superhero. There’s too much of it at once, rather than an organic conversation growing from where Kamala is now as a superhero. Just bang-bang-bang, advice-advice-advice. I want more out of a team-up I’ve been anticipating for a year and a half!

We do get this gem of a panel though, after Carol compliments Kamala’s skill with her powers, and it really sums up the entirety of the Ms. Marvel series…

The team-up isn’t over, and there should be more plot development in the next issue. To be continued!