Tired of your comics continuity coming apart? Of DC and Convergence, of Marvel and Secret Wars? Looking for a character who can effect real, lasting change? Who matters more than all the others? Then of course you are looking for none other than Deadpool, and the comic of choice this week is What If Venom Possessed Deadpool?

I originally picked up this comic because I was like “Hey, I like Venom and I like Deadpool.” But you’ll notice in the discussion to come there’s not a lot of Venom. Yeah… wasn’t really the relevant part of all of this! Venom, through the symbiote suit, is a connection to the original Secret Wars, which is the real point here!

What If? is a longstanding occasional Marvel comic, looking at (you guessed it) the “what ifs?” of comic events and happenings. However, it’s usually a bit more serious… this one is 100% parody. Possibly more percents.

It was the spark that started the fire – a legend that grew in the telling.

At the end, it’s the mirror of that story. The collapse of the Avengers. The Illuminati replaced by the Cabal. The end of the Marvel Universe.

Jonathan Hickman’s run writing Avengers and New Avengers has been a blast. I’ve blogged about it a good deal because it’s one of the main comics I have been following on a regular basis – although I have stepped down to reading it in the trade paperbacks/collected digital volumes. That said, I am here now because these two comics just released their last trade last week – the end of the four-trade, two-title saga called Time Runs Out, which led directly to the current Marvel Secret Wars and which ended the Marvel Comics Universe in a very real way.

So how did we get there? Even if the why of the universe ending was corporate and marketing and business, the mechanism that got us there took about 100 comics. So what happened? Why did time run out?

A Quick Rundown of Hickman’s Avengers and New Avengers

To make this a quick rundown, I am going to be sourcing things out to previous posts I have written. In these posts, I have a number of screencaps from the comics with some further explanation of things so it’s not just me I’m referring to, it’s the comics themselves.

At their heart, these were two parallel and competing stories. In Avengers, as in the image above, it’s a bit of a reboot/reforming of the Avengers team. A fresh start, a new beginning. With an expectation of greater threats: with a need for a bigger team. So an origin story of sorts there. Meanwhile, new “villains” (many of whom end up new Avengers), new problems, and new versions of “old” heroes – like a female Smasher and a new Hyperion. Meanwhile, with the larger backdrop of the villains and the big fight to come (Infinity, which I blogged in three parts), there is a larger narrative and origin story of the whole universe. Callbacks to a narrative of, essentially, the big bang.

In New Avengers, that story becomes one of universal death. Of the opposite of the big bang: a big collapse, with the whole universe collapsing at once. Which they get to see happening, multiple times: the entire multiverse (multiple universes) is collapsing, universe by universe dying. I included Mister Fantastic’s excellent explanation in my original review.

Thus, the dual character of life, and death, between the two stories, which I have found really cool, and which I talked about as one of the great themes in Hickman’s comics in general.  END_OF_DOCUMENT_TOKEN_TO_BE_REPLACED

Alright, maybe I use the term “classic” loosely but it certainly counts as something if, 30 years later, it’s still floating around in the Marvel Comics consciousness. This was Marvel’s first big “event,” where heroes and villains from across their titles ended up together in the same place dealing with the same situation.

And it shows – there are a lot of moments with people introducing themselves and clearly meeting for the first time. By today in the comics, the X-Men have fought Avengers numerous times, and half of everyone has been a member of the Avengers, there have been team-ups, and other big events have happened… there’s a whole lot less of the characters not knowing each other!

So quick synopsis: what the heck was a “Secret War?” Well, a handful of Marvel heroes (like most of the Avengers and X-Men, Spider-Man, most of the Fantastic Four… oh, and Magneto) and villains (like Dr. Doom, Ultron, the Wrecking Crew, Absorbing Man, Doctor Octopus… oh, and Galactus) find themselves whisked away across the cosmos to separate space stations. Down below, they watch as a new planet is formed – formed with pieces of other planets, a patchwork planet that comes to be called “Battleworld.”

Oh yeah and a galaxy is destroyed. Don’t worry – I think it gets better.

Then, after showing off its power, a voice speaks to them all: battle to the death, and they will be rewarded with their greatest wish. To top off the show of power, Galactus – his greatest desire being to stop wanting to eat planets – just goes straight for the voice and the glowy spot in space that is its source (the Beyonder). And Galactus is struck down.

What follows is 12 issues (a year) of the villains selfishly – and then following Doom’s orders – working to win the battles, and the heroes not quite getting along to fully stop the baddies. There are civilians, alien technology, and all sorts of things on the different patchwork pieces of the planet. So each fight is different, with new stakes or toys at their disposal. Galactus tries to eat the planet, Doom comes up with a scheme and gets the Beyonder power and loses it… and yeah, end result, not too much happens.

Although for a while, Doom has a face again. Cover to Secret Wars #11

Okay, there are a few results. Some of the people summoned sound like they were dead in the comics and come back. Some new heroes and villains are created. I would say the biggest result was really Spider-Man finding the Symbiote suit, which would come to be known as Venom… 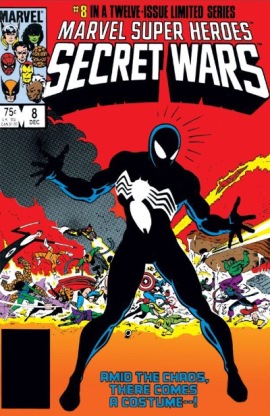 This was Marvel just getting started with events. Part of the idea is that “relevant” things should happen, character resurrections or deaths, suit changes, stuff like that. Big stakes, and seeing how the characters deal with them. And then usually a big reset button to return almost everything to normal. Marvel would get better at this, and one of the best is probably still the Infinity Gauntlet for stand-alone all-powerful-villain events, or else the Age of Apocalypse for alternate-reality-creating impact. 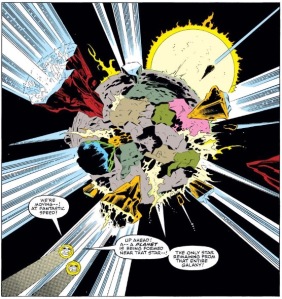 The creation of Battleworld!

So why am I talking about Secret Wars? Well, more than anything, because they’re returned to Secret Wars in the comics. The first Secret Wars was the result of a single, all-powerful Beyonder having a whim to be entertained. The current Secret Wars is so much bigger than that – it’s the result of every Beyonder working together. Instead of a Battleworld built out of a few scraps of planets, the new Battleworld is built out of the last scraps of the entire multiverse – of all of the Marvel alternate universes. It’s an event which is seemingly taking apart the entire Marvel Comics universe, with the idea that it will for real and true never be the same again.

So how did they get there? That’s a post for another day – so I’ll be back soon with Time Runs Out!

Images copyright Marvel, and captured from the Marvel Unlimited service.

Good day, everyone! I know it’s been awhile, but working two jobs has kept me away from blogging for some time. However, I decided to take advantage of a little free time and come back to put together what will effectively be the season finale for my column here at Sourcerer. You, dear readers, have watched my blogging voice grow over the past months as I wrote my weekly Batman column that slowly began to grow into something more. The last couple of posts in that column dealt heavily with the ideas of narrative multiverses and correcting continuity errors by condensing storylines.

I hope to continue that trend when I do return; after all, it looks like Marvel may be headed towards its own Crisis on Infinite Earths with the recent teasers for its latest Secret Wars event that seems to tie into every major story from the past few decades. It’s no secret that Marvel has been playing with its multiverse a bit more over the past few years, with most major storylines featuring orphan characters from defunct universes, as well as time travelers from the past and many possible futures. It’s become a trope in many Marvel books that the timeline is effectively broken and in need of repair. Look for more from me as this event continues to develop.

Aside from my own work, I’ve also missed two very important events for comic book fans, those being Jack Kirby’s birthday (August 28) and Banned Books Week (September 21-27). Jack Kirby, the King of Comics, co-creator of Captain America, creator of DC’s New Gods, and primary creator of most of Marvel’s stable of characters, would have been 97 this year. I would like to wish belated good fortunes to his estate, and it looks like they’ve finally reached a settlement with Marvel over old rights. Further, I hope some of you were able to fit in such superhero stories as Watchmen or The Killing Joke during Banned Books Week last month.

That’s about it for this finale. Look for my column to return in full force in the near future, as well as small periodic posts here and at quaintjeremy’s thoughts. And as for a last comic book recommendation, I urge you all to go out to your local comic shops, talk to fellow fans, find books that will interest you, and follow them with all your heart. Keep the community alive.

I’ll see you all soon.