When I was eight years old, I remember getting a Millenium Falcon toy (which I still have) that was large enough to have quite a few details included inside and not just outside. The day I got it, I also received another gift: one of the volumes from the Yoko Tsuno comic series. It turned out to be the 20th volume, that included not only a time travel story but also bonus drawings with concepts for the previous books. I had no idea when I got sucked up into The Astrologer of Bruges that I would fall in love with this series and that its female protagonist would become one of my greatest inspirations, right up with characters such as Leia Organa and Mara Jade from Star Wars, Jo March from Little Women or Dana Scully from The X-Files.

The Yoko Tsuno series was created…

I think Jonathan Hickman has really risen to prominence recently, has become incredibly prolific. I don’t know if it’s that he’s finally gotten the chance to write stories he’s been sitting on, or what, but he has a number of great ongoing series coming out right now.

Once I figured out who he was and tracked his stories, I have started to see some story similarities, some ways that he thinks about the world. And I love it. He focuses on science, on the far edges of it, the possibilities – especially quantum mechanics and alternate realities. He focuses on mythology, on stories of creation, on stories of the end times. So let me present his comics by these themes, and at the end, some more reading possibilities, ones I haven’t gotten to yet but want to!

The great idea was expansion. And it started with two men. One was life. And one was death. Avengers is about heroes – is about saving the Earth, and then it expands to saving a lot of worlds. They start with a concept: expansion. The threats are getting bigger, so the team needs to get bigger too. Not that they need everyone all the time. So they have a base roster – the Avengers from the film. Hulk, Thor, Black Widow, Hawkeye, and of course Iron Man and Captain America. Then they have a ton of other heroes – ones who are pretty well known, and others who are less known, or new, or new iterations.

So Hickman takes the time to introduce the new heroes, as well as the new villains he has crafted. And he ties it all back to his new villains, to universal-level threats. To the story he is telling of how the Marvel Universe began, about the first race, the Builders. And about the systems they have built.

In New Avengers, Hickman is telling the opposite story. About universal destruction. About the end of not just one universe, but all universes. The New Avengers keep this a secret, and prepare to do whatever it takes to defend the Earth. Iron Man is the only one on both teams – the only one who sees all the threats.

These are great comics to read together. Getting to see the parallels between these two stories, to see the opposite stories happening. 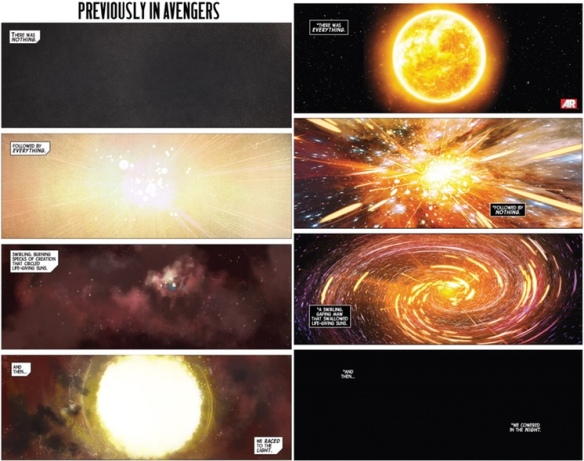 One was life, and one was death. END_OF_DOCUMENT_TOKEN_TO_BE_REPLACED

Now that the holidays are behind us, I’ll be back to posting some longer stuff in the next week or so. I have several things on my list to write over the next few days.

@Parttimemonster: I see your zombieproof vehicles and raise you one epidemiological risk analysis.

"The Brotherhood of Evil Geeks"

Evil Geeks, it’s no secret that I love zombies.  I wouldn’t be spending approximately 16 Sunday nights each year furiously typing away all the latest developments concerning The Walking Dead.  It would even be fair to say that I have somewhat of a fascination with the undead.  Pay no attention to those human skin-bound books in the back corner of the Evil Lair’s Library, that’s some serious magic you don’t want to mess with.  However, the dark arts don’t hold exclusive rights to reanimating the dead.  In fact, there’s a plethora of ways that we could end up fighting off the elderly and recently deceased circus clowns, hopelessly fighting a losing war for survival in the middle of a zombie apocalypse.  I’ve spent years study how to fight off the undead, but luckily for all of us our friends over at Neo Mammalian Studios have been compiling info on just…