Star Wars has created a great many secondary properties, like TV shows, books, and video games. Well, today I want to talk about the video games, because to me, that’s some of the best stuff that has come out of the franchise as a whole. The immersive experience that video games are known for blend seamlessly with the overpowered heroes that Star Wars is known for.

Most video games seem to have a hero that, somehow, overcomes all odds and all comers and wins the days. After all, a great many get to cheat and make use of save and load mechanics… But then, some don’t need that. Some are Jedi.

There are a great many Star Wars games, and I’ve only played so many of them, so rather than list only a few favorite games, let me explore and remember fondly some of the types of games that Star Wars has made great over the years.

First and foremost, it’s worth mentioning that Lego now has a huge number of somewhat-similar, but totally different franchise, video games. Most are movie tie-ins, though some are just based on the general fictional universe, like the Batman ones. At this point, they’ve gotten so good at their storytelling in these games that they’re producing movies based on them.

No, not the Lego Movie. Although they did make a game of that… 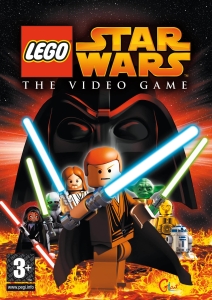 From The Star Wars wikia.

But where did this all start? With what fan-beloved franchise? None other than episodes 1-3 of Star Wars. Wait, the new trilogy? Not even the original? That’s right. The mechanics blended beautifully with Lego manipulation, with the Force helping you build Lego objects and move them around the environment (something which they haven’t done as well in-world since except in the Harry Potter games).

The new trilogy also meant that you basically spent the whole time as Jedi – meaning you were also crazy powerful and nigh invulnerable. The Lego Games are great co-op games in part because this has persisted – you don’t die in the games, just lose coins and respawn. And you can pick the coins back up. The nigh-invincibility made the most sense with the Jedi.

Regardless, this was a strong game, which not only spawned two more Lego Star Wars games, but a whole host of other Lego games. They started strong, and are still riding that wave!

Also from the Wookieepedia.

One of the things that Star Wars has in droves is cool land and space vehicles. And one thing they have made plenty of games for are vehicle games and simulators. I would be remiss if I did not mention the X-Wing simulator game, one that Gene’O still remembers and loves. I remember playing the Podracer one as well after episode 1 came out… almost like they included that ridiculously long scene so that they could make a game of it?…

I’m not much of one for racing games (nor the Lego racing mini-games…) but I remember loving the vehicle sections in some of the Star Wars games I’ve played. Such a variety, and they all do different things. Really just great from a video-game perspective.

Of course, playing through the movie plots like in the Lego games is one thing… and simulating the vehicles is another… but the wide world of Star Wars really is ideal for an incredibly immersive experience, and where you get that is in the roleplaying games.

Actually, they made two KotOR games! I’ve been playing the first on my iPad… need to get back to that!
Image from Wookieepedia a third time.

Maybe the best known and most beloved of these is Knights of the Old Republic, a game from BioWare. BioWare is known for story-heavy games, with open-ended elements, lots of character choice and character driven stuff. That all sounds really good, set in a Star Wars universe!

It also lets you play more than just a Jedi. After all, characters like Han Solo and Princess Leia captured people’s imaginations just as much as the Jedi did. It also lets you be good or bad, light or dark side. These sorts of decisions allow for a very unique experience, and replayability.

There have been other roleplaying games – including two different massively multiplayer online games (MMO’s) which have been pretty popular as well. I know people who have poured a whole lot of hours into those, and loved them!

So good. Spent so much time with this in college.
Yup, Wookieepedia.

In Star Wars Battlefront, you and friends go into a game which is also full of computer bots. Basically, full squads on both sides of a fight. You can be all on the same side, or against each other. Then you battle over control locations, which, once you hold those, give you access to vehicles, and even eventually Jedi.

There were different troopers to choose from as well, so you could be a basic sort of blaster Storm Trooper, or have rockets, jet packs, all sorts of things. Then there were tanks, or space battles where you had to fly from main-ship to main-ship, speeders, AT-AT’s to take down… and eventually, when the battle had been going for a while, the option to spawn as a Jedi came up. And fighting a tank with Yoda is just a fun thing.

!!!
Of course from Wookieepedia.

Our favorite mode, though, was a battle you could have at the Cantina, where all the options were Jedi. And it’s just a giant Jedi melee, with Force pushes and pulls, super jumping and running, thrown lightsabers, and General Grievous just walking around swinging four lightsabers… It was a blast.

Meaning, what game might actually make me buy one of the new generation of gaming consoles? Star Wars Battlefront 3!

What about you – what Star Wars games have you loved? Let me know in the comments below!

If I’d discovered a way to get paid for playing video games when I was in my late teens, I would be one of the wealthiest people you would ever meet right now. For years, I spent most of my non-writing computer time playing video games. I haven’t been into gaming in years now because work, a grandson, and blogging doesn’t leave any time for them.

Here are the games I spent more time playing than the rest when I was a hardcore gamer.

Morrowind is one of those games you either love or hate. It’s the third installment of the Elder Scrolls series and the only one I ever played. It was released in 2002 and I picked it up year later at the used game shop. Fell in love with it immediately, and it’s pretty much the last game I ever played.

Several things make Morrowind special. It’s set on a island so huge and detailed it takes a single player months to explore. It has a linear storyline and quests, but you don’t have to actually complete any quests or the storyline to enjoy the game. And the game doesn’t end once you finish the main quest. It’s basically a huge sandbox that allows you to do pretty much anything you want.

It has an excellent system for creating custom spells, crafting magic items, and making potions. And it’s one of the easiest games to modify that I have ever encountered. The modding community gave this game a lot more longevity than it would otherwise have had. Want a huge palace or a companion to travel with you? There are mods for that, and for just about anything else you can think of.

Fallout is set on a post-apocalyptic earth which was laid waste by nuclear war in the 1950s. The first game begins 100 years after the war. The player character has grown up in an underground vault, is given a quest which requires him to venture above ground, which is now a wasteland peopled by bandits, mutants, and paramilitaries.

The Fallout wasteland is one of my favorite settings ever. This series is distinctive for its striking iconography and darkly humorous storylines. The first Fallout was simple, and too short, but I remember thinking at the time (1988) it came out that I’d never seen anything quite like it. Here’s the intro to Fallout 2, voiced by Ron Perlman, to give you a sense of what this world is like.

The Sid Meier’s Civilization franchise has probably gotten more of my time than any other. I played these games off-and-on from 1991, when the first one was released, until about four years ago when I stopped gaming. These are turn-based strategy games in which you build cities, use them to produce units to defend your civilization and build more cities. The game begins at the 4000 BC and runs to 2050 in most versions.

You can win civilization in several ways: by sending a spaceship to Alpha Centauri, by total military conquest, by domination — which means ruling a certain percentage of the world’s population and territory — or by being ahead in points when the game ends at 2050. You can play on randomly generated maps of various sizes, and choose the number of opponents to play against. My favorite thing to do was upload a pre-generated map of the actual earth and play with as many opponents as possible, because that makes for a long, interesting game of shifting alliances.

I could go on and on about civilization, but I’m already over my word count for an A to Z posts. So, what about you? Ever been into gaming? What are some of your favorites?