So it’s been a minute since an episode of The Walking Dead aired, and as of the evening I’m writing this the companion series Fear the Walking Dead doesn’t even have an airdate yet, so I managed to worm my way into the Wednesday comic book series.  I’m planning on focusing on science fiction comics that you either should already have read or you should be reading, and I’ll keep that theme going until I get bored with it or come up with something else I really need to be writing about.

There will be a lot of Warren Ellis.

But we’ll start off with Jeff Lemire and Dustin Nguyen’s DESCENDER.  Because you really really really should be reading this book.

Let’s start with the cover, before we even get to what the book’s about.  The book, as of writing this, has three issues out, with the fourth due TODAY, and that’s the cover to issue #1.  The first storyline, “Tin Stars,” is slated for five issues, presumably with a trade paperback to quickly follow.

But yeah, that cover.  Stunning, innit?  You know everything and nothing about the book right away; the wistful look on the robot boy’s face, the loneliness of the pose against black sky and a full moon, the sparse stars with a few wisps of red gas.  It’s gorgeous and simple and evocative, and that’s generally how Dustin Nguyen rolls in this book; some of the panels don’t appear to have even been inked.  Of special note are the colors, also by Nguyen.  This book is absolutely incredible to look at:

But that’s not enough, you say?  There has to be story?  Okay.

Giant robot apocalypse.  AI/Robot purge, led by the remaining hoomanz.  Fast forward ten years, to a little boy’s robot companion, named TIM-21, waking up on a mining colony where everyone but him is dead.  And who appears to hold the key in his programming to the Harvester robots who broke everything.

(That’s all I’m telling you.  Okay, that and the fact that a good chunk of issue 3 takes place in the robot afterlife, which ought to count as a spoiler but doesn’t because it will not help you predict what happens.) 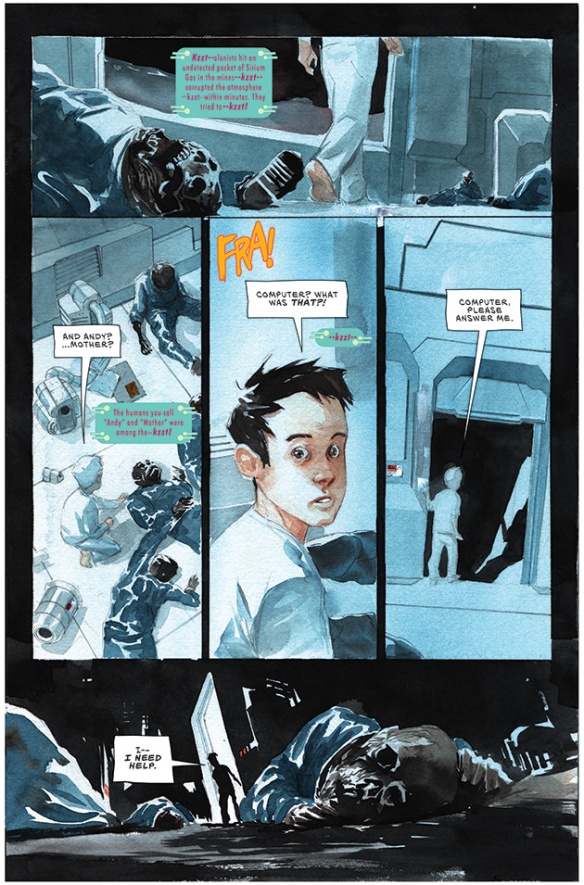 DESCENDER has been optioned for film already.  I believe it had happened before the first issue even made it to press.  That would count as a miracle, except I’ve read the book so I know exactly why it happened.  You need to be reading this book and you need to get onboard now, while the series is still in its infancy, so you can turn your nose up at the people who only know it from the movies.  C’mon.  You know you want to.