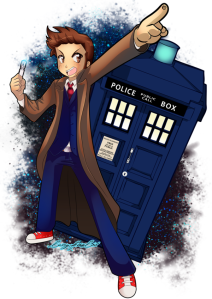 Initial disclaimer: Everything here  is my own personal opinion and does not reflect on the other bloggers here, who will likely disagree with me and may not even like that I wrote this. I will never claim that the things I do not personally enjoy are worthless or stupid in any way; they simply aren’t for me, and I’d like to understand why. My time as a teacher has taught me that controversial topics often elicit the best responses, so here we go!

How often do we wonder why we enjoy the things we do? In Nerd Culture, we have many, many fandoms devoted to all sorts of things we enjoy in comics, science fiction, fantasy, horror, hybrids of these things, etc. But do we ever really stop to wonder what about a certain something tickles our fancy? Let’s dive into a couple that are sure to rankle.

I do not like Doctor Who or Harry Potter. I never have. They do not appeal to me and I doubt they ever will. I don’t think it’s just because they’re British; I mean, I enjoy Douglas Adams and many, many British comics writers like you would not believe. I say this because I want to understand why Doctor Who and Harry Potter are so popular among people who are just like me and often like a lot of the same things I do.

Doctor Who and a lot of the popular British sci-fi I’ve experienced just seem too silly. There’s a lot of interesting high concept ideas that I feel get buried in a haughty joke or poor execution somewhere. Here I am imagining the holographic deep space exploration ship from Red Dwarf that was more a prop for humor than the truly fascinating hard science fiction thought experiment it could have been. Before you point it out, yes, I realize that Red Dwarf is meant to be comedic foremost, and that might be the problem.

On a side note, I (still almost entirely an outsider) notice that Doctor Who uses many of the same tropes as popular comic books—gimmicky storylines and impermanent character deaths in particular. I find this personally baffling because popular comics are often criticized, even ridiculed, for these practices, but Doctor Who soldiers on untouched. Why do we give these events in this show a pass?

I also have mad respect for J. K. Rowling’s accomplishments, but I don’t think I could ever bear to read her work. First off, magic itself is far from the top of my list of things I find enjoyable in fantasy. That, and a series of updated British boarding school novels that all have pretty similar plot structures just don’t do it for me. Again, I’m far from the most desirable audience for these works of art, but why?

I genuinely wish to invite discussion on these points. Those of you who have seen fit to follow my thoughts so far and disagree with me, why do you feel you enjoy these things? If you agree with me, then why don’t you enjoy them? Once we get this going, I’d even like to discuss my own interests and try to puzzle out exactly what about them appeals to me.

On a final note, I am not trying to spread discontent among varying fandoms. On the contrary, I feel these sorts of discussions, when conducted in a civil manner, might actually make our community stronger and more open minded to each others’ particular peculiarities. If this is successful, I’d like to facilitate similar discussions from time to time in the future.

I hope you all have a good day, wherever you are.