Happy new book day, everyone! Today marks the official 75th anniversary of Batman’s first appearance in Detective Comics #27 back in 1939. That was one of the primary reasons I chose to start my blogging hobby with a Batman column, and I have stuck to it for seven months now.

I have tackled lots of angles on the character, his history, his potential heirs, and even some of his antagonists (after all, the Joker is in all of us, just waiting to get out). I have also shown you all part of my Batman collection, voiced my need for aid in finding an old comic from the 90s, and even drawn sometimes loose connections between Batman and real life historical figures. It’s been a wild ride so far.

Though I am not exclusive with my superhero fandom, Batman has held a special place in my heart since childhood. The Tim Burton/Michael Keaton films and Batman: The Animated Series cemented differing versions of the character in my mind at a very early age, and the idea of the multiple narratives, universes, and timelines of this mythical character attracted me almost from the beginning. In fact, I still imagine Kevin Conroy‘s voice whenever I read a comic featuring Batman.

And that version of the character may be for me what many would call the Batman of my heart. It has grown over the years, shaped by the stories and other media I’ve been exposed to in the years since, but some things remain part of the character’s core.

Batman isn’t entirely good or kind–no one that damaged would be–but he has enough of both present within him to recognize the darkness his experiences have placed within him, and (again, as Frank Miller has said) he makes that darkness work for the betterment of the world around him. He is generous and charitable with his immense wealth, since it holds little allure for him beyond funding his war against crime and maintaining the illusion of Bruce Wayne’s apathetic playboy lifestyle. Because I also believe Bruce Wayne is the false identity and Batman is the real character; Bruce only exists to keep suspicion off of him in his real life.

And I believe that life is long and filled with adventure. One day, decades hence, Bruce will finally be forced to retire and pass on the mantle to one of many possible heirs. Because there must always be a Batman.

That’s my thought for this auspicious day. Any of you who might be capable should leave flowers on the graves of Bill Finger and Bob Kane today. Little did they know what their attempt to simply pay the bills would become over the next century.

That said, who is the Batman of your heart? Which take from which writer, artist, or medium is the core, definitive Batman for you? Let me know in the comments below.

I would also like to take this opportunity to announce that I will be expanding the scope of this blog in the coming weeks. Batman shall always form its core, but I need to stretch my legs a bit. Please keep coming back to see what I’ve come up with.

My comic picks for this week:

Happy new book day, everyone! Today, I want to take a little break from Batman himself and begin discussing some of his supporting cast and rogues gallery. I believe the appropriate first choice for this will be the Joker.

The Joker first appeared in Batman #1 back in 1940. Appropriately enough, given that so little is known about the character, his exact creator is disputed to this day—creator credit is generally spread out across Bob Kane, Bill Finger, and Jerry Robinson. Originally meant to be a one-off character, the Joker seemingly returned from the dead due to an unexpected upsurge in his popularity among fans after (what was intended to be) his single appearance. Indeed, the Joker has never not been popular, and is likely as well known as his heroic nemesis. Why is this? What makes this character as immortal and (arguably) as beloved as Batman?

The Joker is sometimes painfully campy and goofy, while at other times he is a chillingly deranged mass murderer. What is the appeal of this character? Deep down, as can be argued with Batman, do we as readers/viewers sense a sort of kinship with the character? Do we understand him? Does he force us to recognize something we are afraid to see within ourselves? Let’s try to address these questions.

END_OF_DOCUMENT_TOKEN_TO_BE_REPLACED 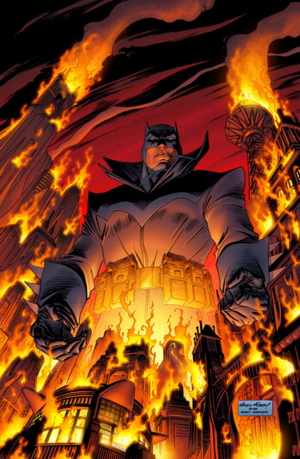 Happy new book day, everyone! For this week, let’s take a break from Bruce Wayne and have a look at his son, the beloved/hated Damian. Though he is (potential spoiler) currently dead in continuity, Damian has featured in some great Batman stories, and the possible future in which he becomes Batman is perhaps one of the strongest. Let’s dive in!

Damian Wayne is the son of Bruce Wayne and Talia al Ghul, which makes him the grandson of Ra’s al Ghul and heir to the League of Assassins, with whom he trained throughout his childhood. Continuity is spotty on a few details here, but it appears that Damian is actually a clone of his parents and that Bruce was unaware of him until he was roughly 10 years old.

Damian was (officially) created by Grant Morrison and Andy Kubert in their Batman and Son story arc in the main Batman title, where he became the fifth Robin (pre-New 52). This creative team and others have gone on to use the character in many projects in the years since. Damian featured heavily throughout Morrison’s tenure on Batman, appearing in many of his strongest stories—The Resurrection of Ra’s al Ghul, Batman R.I.P., Batman and Robin/Batman Reborn (with Frank Quitely), and Batman, Inc., to name but a few.

END_OF_DOCUMENT_TOKEN_TO_BE_REPLACED

Good day, everyone! After a couple of weeks of somewhat tangential diversions, I want to return to the original Batman himself, Bruce Wayne. There have been as many iterations of Bruce Wayne as there have been writers tackling the character and actors portraying him, but what is the real core of the character? Why does he endure and maintain such outrageous popularity?

As I pointed out initially, Batman is a product of the 1930s, one of the very first superheroes—the Dark Knight to Superman’s Sun God. He was created during the Great Depression. I don’t think it is any great leap in logic, and other writers may have commented on this before, to see Bruce Wayne as a thought experiment into what a good and useful rich man should be at a time of not only national, but global crisis.