Here on Sourcerer, I have blogged about two things: comics and music. Today, I get to talk about both!

Let me set the scene. In Guardians of the Galaxy, one of the great movies and greater soundtracks of the summer, there was an odd scene at the beginning. Making a ridiculous spaceship escape, the hero, Star-Lord, gets confronted by a female woman who was sleeping below decks, and got thrown around as the ship flew off-planet. And his line, in this moment, was, “I forgot you were here.”

Star-Lord, or Peter Quill, is a human who was abducted at a young age by a crew of alien pirates, and grew up with them. He ends up as a womanizer, con man, and liar, and it might be easy to dismiss this sort of moment as “oh, those pirates.” From the other angle, it’s been criticized as a scene that really did not even need to exist. They could have cut it and not changed the movie much at all. Sure, Gamora later accuses him of being a womanizer, but how did she know? And do we need a throw-away scene to, as the audience, know that about him?

I have come to find a third opinion about this scene, about this character trait, this aspect of his personality. I use the term “rake” to describe it, perhaps a dated term but one I know well from my history thesis on William Hogarth (with his Rake’s Progress), and more recently with something like the Decemberists’ The Hazards of Love. I suppose more modern terms would be “player,” “ladies man,” or my favorite (from Scott Pilgrim versus the World), “lady-killer wanna-be jerky-jerk.” So why is Star-Lord this way? It makes sense to me now, and I want to share why.

It’s Not From The Comics… 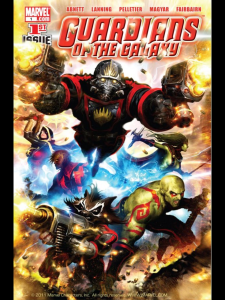 Over on Comparative Geeks, one of the things we do is read the source material and then see the movie, something we call LitFlix. Well, for my Guardians of the Galaxy LitFlix, I read the whole 25-comic run of Guardians where you first see this group of heroes (plus friends) together. I’ve read some of the start of the newer run, as well. Sure, there’s a lot more of the comics I haven’t read, and Star-Lord has been around since 1976.

Still, in what I have read, Star-Lord has not been a Rake. He’s been manipulative and lies, uses his charisma and words as his weapons as much or more than his trusty elemental pistols. But him and relationships? Or less than that – him and womanizing? Not really a part. Certainly not to the extent that it shows up in the movie!

So it’s not some little detail they snuck in to try to be faithful to the comics, it’s not a nod to the hardcore fans. Assuming there even was such a thing for Guardians of the Galaxy before the movie was announced…

Where Does It Come From? How About The Music?

END_OF_DOCUMENT_TOKEN_TO_BE_REPLACED

If you haven’t had a chance to see Guardians of the Galaxy yet, might I suggest checking it out? I have been blogging on Sourcerer about 2 things: comics and music. This movie is a perfect combination of those two things.

Previously, it seems like it’s Zack Snyder who had a hold on good use of music in comic-book type movies, especially Watchmen and Sucker Punch. But those movies were a lot darker: Guardians of the Galaxy has great music, and used it to generate a sense of fun, as well as emotional depth.

You can see some of how they use music in the first trailer, with the now iconic use of Hooked on a Feeling. I also think this is a perfect sort of character: it introduced the characters, the movie, and left it pretty much there without giving much away. I avoided other trailers after this one, and just saw the movie from there!

I will say, I do include the second theatrical trailer below, for music purposes. I’ll hit a spoiler section where this is appropriate; but the second trailer gave a lot away so know that. But for now, a couple of the reasons that Guardians of the Galaxy was good, in relation to its use of music!

Music as a Character

From the first moments of the movie, we can see that our lead character, Peter Quill (played by Chris Pratt), loved and loves music. He was getting lost in music as a kid, and, after being abducted, clearly kept this obsession.

He ends up in space for the rest of his life, or at least so far, and his only connections to Earth are his memories (constantly referenced through pop culture), a couple of artifacts (trolls!), and his music.

One cassette. A mix tape, made by his mom, who died right before he was abducted. So it is not only the connection to Earth, to the life he lost, but to his mother, the family he knew. The music stands in for Earth, for family, for love. I used the word obsession, and I think for Peter Quill, this is probably just right.

But it’s more than that. The music functions almost as a character in the movie. It reminds us of the mother who left the music for Peter, it grounds us on the Earth we know even as we experience the cosmic Marvel Universe that is exploding off of the comic page onto the big screen. Because even as these recognizable songs play, you realize they’re not just a soundtrack: they’re the songs Peter has with him.

In the comics, as with a lot of science fiction, we come to find that humanity is far behind when it comes to technology. Indeed, this is a major plot in The Avengers, as Nick Fury talks about how they were working on advanced weapons technology because they had found out how powerful the rest of the galaxy seemed to be. Blame Loki, I guess; everyone else does…

Often, it’s human pluck and determination that stands out, or human ingenuity, inventiveness, and diversity. Vague notions to make us feel good about ourselves, and staples of science fiction. It’s rare that something specific gets held up as a special thing from humanity, something that the alien species encountered like from humanity.

Guardians of the Galaxy give us that something. Music. I can point out three examples:

We can conjecture some of it too. Peter grew up with the Ravagers, and kept his stuff – and kept the Walkman running! – throughout this time. Surely they were exposed to it as well. Also, Peter seems to have a pretty extreme rakish side to him. You can see him potentially sharing his music with women – like he did with Gamora – and having them fall in love with it as well.