I’m not sure if “conspiracy” is the best term for it, but it’s catchy, right? The question has been bouncing around, and I really got to reading about it after a link from Cirsova. The question is whether Marvel comics has been suppressing the X-Men and the Fantastic Four, in terms of merchandising and in the comics. The thought on the motivation is mixed, from basic business sense (Marvel isn’t making much on the X-Men and Fantastic Four movies developed by Fox) to far more sinister decisions to undermine these movies and make them fail.

I’m not sure I have the answers, either. Certainly I’m not holding the smoking gun. But for your comics Wednesday enjoyment, I can consider several of the recent series, and what they might mean in terms of the idea of a conspiracy. Sinister motives? Or writing themselves into a corner? The questions I have for you as we consider the X-Men Conspiracy!

I guess I’m not sure which merchandise people are considering, when they talk about there not being any merchandise for non-Marvel-rights-owned characters. Potentially action figures, and I’ve been out of that market a while – though I did see an action figure of Hyperion recently, and that’s one heck of an obscure character, who’s currently an Avenger in the comics.

I bought this guy!

The merchandise we have gotten recently has been Lego: Marvel Superheroes, which was full of characters from throughout Marvel (and the very most powerful ones were Super Skrull, a definite Fantastic Four character, and Phoenix, very much so of the X-Men). That, and we’ve been looking down the dangerous road which is Funko Pop bobble heads, which include a number of Marvel characters (I got Ghost Rider!).

Then again, thinking of the advertising we’ve seen… there’s Disney Infinity, with the Marvel heroes. The only character I have seen for that outside of Marvel Studios movies is Iron Fist. Well, and kind of Nova. But both of those are Marvel Studios-owned as well, I’m pretty sure.

So, what do I think? The merchandising is almost pure money-making business, and you make decisions for that based on where you make the most money. That’s why Disney Infinity (and Skylanders before that) exist in the first place! So are they focusing on their own properties with that. Conspiracy? Or just really obvious business decision-making, being made by sales sorts of people who make business decisions? I say the latter.

The Conspiracy: The Comics

Here’s where it gets much harder. Who knows what’s happening in the writer’s room at Marvel? Well, we all kind of do – well after the fact, when we see the story arcs in their fullness. But the comics about the different teams of heroes, or even about many of the specific heroes, are written by a number of different writers at one time, much less over the course of time! 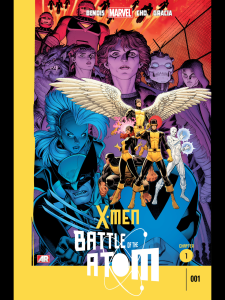 From my review over on Comparative Geeks.

Here’s some of my thought on this question, from reading the comics. Especially last year’s 50-year anniversary of the X-Men crossover event: “Battle of the Atom.” This crossover included the past – in the form of the All New X-Men, which I’ll get to in a minute – the present X-Men, fractured into two camps, and the future. The future they worked in reminiscent to Days of Future Past, which made sense to me also with the movie on the way…

In this future, there’s some advance for mutant rights. A mutant president is elected! And, at the inauguration, is killed by sentinels.

And really, all I got out of the whole crossover was the thought that, after fifty years of writing, after struggling all that time with rights issues and building the battle between mutants and humans – they never get anywhere. They are still envisioning a future where the mutants are losing.

I guess you look at the news today, and it makes sense for the battle for civil rights to be never ending. It’s hard to pick the day where you look up and say, “it’s over! We’re all equal now!” Still, I would understand how, as a writer, you’d kind of want to go back to the drawing board at that point. Think harder. Approach the issues from new angles.

The event was, overall, depressing and not that great. I wrote more of a review of it here. But even thinking about it through the lens of the conspiracy, I don’t think it’s that. I think it’s 50-year writer’s block.

Alright, that was my focus, let’s do a lightning round of other series and crossover events of the last few years! Then you decide.

You can see why I don’t feel like I have the answers: lots of the plots lately make some story sense beyond the idea of locking-out the X-Men and Fantastic Four. Who’s to say? Feel free to weigh in in the comments below!

As a final thought, I find it hard to even see the figures on comics sales. But we know the movies are all making bank, and there’s a lot more planned where these came from! Have the comics become the gold mine for producing future movie plots? That one I find it much harder to answer, and that one is a really big, long-term business decision that deserves a reminder that Disney bought Marvel.