PREVIOUSLY ON THE WALKING DEAD:  Everybody’s gonna die.  That’s it.  I’ve been a writing teacher, right, and one of the things I’ve done AS A JOKE a few times is suggest that kids end a story with an asteroid strike and just kill everyone.  I mean, it’s final, right?  The third episode of this season is gonna be an asteroid strike, only the asteroid is going to be made of biting, and they’re just gonna kill everyone and go home.  Holy crap.

The episode begins with Enid in a cold open, as we see some of her life before joining the Alexandria crew.  We see her parents get eaten.  We see her find a turtle.  We see her eat raw turtle, which… god, that’s gotta be a salmonella risk or something.  We see her walking through a driving rainstorm but her hair isn’t wet, which is kinda weird.  Maybe she’s Jesus.  We see her bloody and messy and gross and oh she keeps putting JSS everywhere:

I know that’s a lot of pictures all in a row, but it’s really a quite striking couple of minutes– one of the best cold opens the show has ever done– and it’s also nicely mysterious and gross.  And Enid’s already way more interesting than she was last season.

So, yeah.  Back to Alexandria, where Carol is teasing somebody in a sort of passive-aggressive I really hate you sort of way about her smoking, and that lady’s still looking for her pasta maker, and then Carol gets back home and Sam is sitting on her porch.  Showing that maternal side we all love her for so much, she says “Your dad used to hit you, and he got himself killed.  It happened.  You live with it, or it eats you up” to the kid.  Yeesh, Carol.  Maybe at least avoid the phrase eats you up?

She makes a casserole, sets the timer for 45 minutes and looks out the window.  Smoker Lady is out in her front lawn having a cigarette.  And then she is suddenly HACKED TO DEATH OH CRAP THE WOLVES ARE HERE and this is the rest of the episode:  MURDER DEATH STAB BULLET BLOOD EXPLODE BURN DIE FIGHT MURDER BLOOD BLOOD STAB HATCHET MACHETE BLOOD BLOOD BLOOD AAAAAAAAHHHHH

I could credibly end the recap here: the Wolves attack Alexandria, they kill a whole lot of people, mostly horribly, except they don’t kill everybody because Carol.  I mean, that’s it.  The rest of the episode takes place basically in real-time; at the end, Carl takes the goddamn casserole out of the oven when the timer goes off.

Let’s bullet-point everything else I need to say. 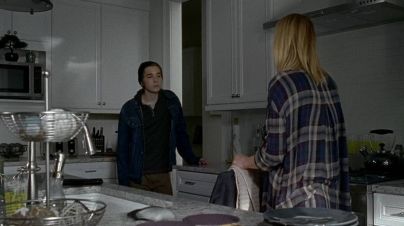 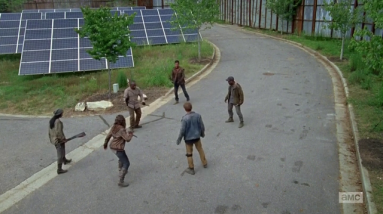