I’ve been threatening to write about Dungeons and Dragons for a few weeks now. That starts today. These posts are a memoir. I’ve considered various ways of organizing them.

I almost went the chronological route and started with my earliest experiences but um . . . no. Chronological memoirs are so done. I’m bringing the fun.

I’ve got more tabletop gaming experience than any continuously-employed 40-something dude I know. I started with the old boxed set that came with The Keep on The Borderlands, the Blue Book, and chits instead of dice. During the 90’s and 2000’s, I was part of a Sunday gaming group which played at least two sessions per month for almost 15 years. 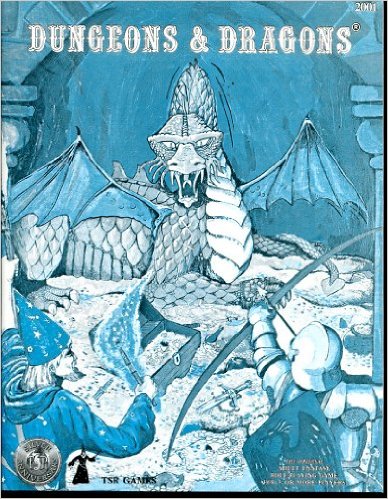 Quite the iconic cover, this. I first encountered it when I was 8 or so. It captured my imagination.

I’ve Dungeon-Mastered a lot of campaigns. I’ve played in even more. I’ve wandered Forgotten Realms, Greyhawk (my favorite out-of-the-box-world), many worlds created by friends, and a few offbeat settings such as Red Steel. I’ve run campaigns in worlds of my own creation. I’ve also played Shadowrun, Traveller, Cthulu (my favorite non-D&D tabletop by far), Masquerade, and several GURPS-based games.

I’ve played a LOT of characters, and I’ve been awestruck more than once by things other people did with their PCs. I’ve created enough NPCs to populate a canon larger than The Collected Works of William Shakespeare. Today I’ll share  with you the best evil player character I ever created. 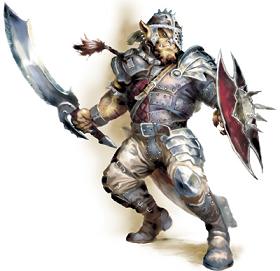 A Forgotten Realms Hobgoblin. He’ll do to represent Louis.

His name was Louis Scrounge. First name pronounced the way “Louis” is pronounced in France. He was a Neutral Evil Half-Hobgoblin warrior created with variant PC-Race rules for a gunpowder game (I love me some flintlocks, oh yes I do). This was also a maritime campaign. That means tons of close-quarters combat in light armor. It also means, for evil characters, egregiously bloodthirsty piracy.

One of the many rulers of France named Louis. You get the joke here, right?

His two chief accomplices were a Chaotic Evil Gnome Rogue/Sourcerer who knew every trick in the Joker’s Playbook and a Lawful Evil Drow Mage with a fetish for poison and Frankenstein experiments. In our first outing, we all joined the crew of a small merchant/privateer as specialists without letting on we knew one another. Louis enlisted to be the boss of the half-dozen or so 0-level fighters whose job it was to defend the vessel. The Drow signed on as the ship’s surgeon. The Gnome? LOL. Cabin boy. Can you say “Dangerously Genre-Savvy?”

Needless to say, the captain ended up bleeding from the throat and tossed over the side in the dead of the night as soon as we hit open sea. We elected an NPC to keep the sails full until such time as we could consolidate our power and get Louis into the big cabin. Then we convinced the NPC placeholder-captain to go prize-hunting. This is how our career started. It’s one of the most memorable first adventures I’ve ever been a part of. That first ship was like Animal Farm, and we were the (extremely evil) pigs.

That long-running D&D group is the best interest-based offline group I’ve ever been a part of. It was a good mix of powergamers and roleplay nerds. Most of us were a bit of both. We rarely went the purist route with the rolling of three dice and taking whatever we got for ability scores in the order we rolled them. Sometimes we used point systems. More often, we did this:

What you usually end up with using this method is a couple of 11’s, one or two 16+ scores, and a mushy middle that can run from 10 to 15. We sometimes added Unearthed Arcana-style Comeliness to make Charisma-based roleplay more interesting. Occasionally we used Luck, which is not a normal ability score, but is derived from the basic six, and usually was a stat that ran from 3 to 5.

We could use a Luck point to automatically roll a natural 20 or pass a saving throw, but once we did, that point was gone until we impressed the DM enough to earn it back. It was not possible to spend two Luck points in one go, nor fractions of them. They were awarded and spent one at a time, always.

We were in the business of creating above-average characters with superhero potential, and we had a lot of fun with it for a lot of years. Never once in all that time did I witness a character make it to 20th level. The first five levels are important — once you hit sixth, you know who you are. Most of the character deaths I’ve seen have either happened right out of the gate, or between 12th and 15th levels.

Back to Louis. He was a Third Edition character with feats and such. Started with a 19 Constitution and a very low Charisma, because Half-Hobgoblin racial ability adjustments. A 17 Dexterity and a decent Strength. He wasn’t the brightest bulb in the box, nor very observant. That’s way survivable, though, with the right friends. I can be cunning even with a low Wisdom and Intelligence. And being confident that if you can hit something JUST ONCE  it will die 75% of the time is a huge advantage for a fighter in D&D.

Louis started out as a first level Ranger, of all things. Then took two levels in fighter. His career ended (I’ll get to the ending in a bit) at 12th or 13th level, and he didn’t have more than four levels in any one thing, but he could take down a 10th level single class NPC like nobody’s business once he was fully developed. He even took a level or two as a Cleric to some dark god late in the game. That decision was like a deal with the devil, but it got hime Cure Light Wounds and Cause Light Wounds, which turned out to be insanely useful.

The first rule of tactical combat, in D&D, in a Zombie Apocalypse, and even in everyday life, it this. Never fight with one hand empty. Either fight with a two-handed weapon, or bring TWO weapons. Seriously. A rolled-up magazine in one hand, or a jacket wrapped around your left arm, are better than nothing at all. First rule.

(DISCLAIMER: Keep in mind, these adventures are things that happened when I was in my 20s. I was not a fully-evolved feminist back then, and I may not be fully-evolved now. But they happened, and I feel like sharing them on the blog today. This is proof that people can change.)

This world was a lot like the Greek Isles. Early on, we made landfall on an island because we’d been becalmed for awhile and we needed fresh water. We thought that island was uninhabited. but actually a faun lived there. He abused us a bit, the Drow most of all. Much later, we gained enough experience for the Drow to learn Teleport. The first place we teleported to? That Island. Right into the faun’s front door.

I blasted the faun with my pistols and we made short work of him after that. Took all his treasure, which was not that much, but would have been a lot if we hadn’t lost that original encounter at second level. Louis made a pair of goatskin pants out of the faun’s leg-fur.

Once, we encountered a slave-market. Louis bought a barbarian witch from the slavers. She had a penchant for blood sacrifice and weather control. Louis kept her as a slave just long enough to make sure she wasn’t going to cut his throat once free (about three weeks of in-game time). Set her free, but offered her power and persuaded her to stay on as lieutenant. The  goatskin pants were actually made for her. She stuck with us to the end. I ran her at one point — the only time in all these years a DM has ever allowed me to run an NPC in campaign where I was just a player.

We also did this. Sailed into a port which had a gladiatorial industry and brought with us a large amount of disposable income. Louis went and signed up to be a free-agent gladiator. The Drow and the Gnome ran around the city pretending not to know one another and placing bets. We even bet the ship we sailed in on at one point.

Louis’s arena technique was simple. Stride into the arena with a short sword in one hand and a whip in the other. Two extra whips on the belt, two extra short swords on his back. Roll initiative.

We ended up with a lot of money and artifacts.

Eventually, we captured a well-armed flying ship which could also sail on the water and look like a normal ship. That was the peak of our career. Happened around 10th level.

This entire series of fictional events took place over the course of less than a year in real time, and covered maybe 18 months of campaign time. It was quick, and it was delicious.

No actual persons were harmed in this roleplaying experience, except maybe me.

Have a Cold War-Era Rock and Roll video by an artist who is no longer among the living. The content of the song perfectly encapsulates where I am with this blog right now.