Recently I got to see the Star Wars and the Power of Costumes exhibit at the EMP Museum. It started out as kind of a “ooo Star Wars!” followed by “oh, look at all those Queen Amidala dresses…” and finally led to that deeper thought and understanding: that costumes really matter a lot for a science fiction (or fantasy, or a lot of other genre) movie. Costumes that look different from what we are used to create the sense of a whole new world.

One of my favorite examples is still the Dune mini-series, for which someone decided that clearly, what all the different groups in the galaxy did was just wear really big hats to show who they were:

We don’t know what you mean…

I could gush about this, or I could mainly share some pictures and a couple of thoughts. Let’s let the pictures speak for themselves!

This is only some of the many costumes of Queen Amidala!

One of the things that the exhibit pointed out was just how much more costumes and the pomp and circumstance mattered in the prequels. This was the more civilized age, the bygone era that Obi Wan lamented being gone. This was an era of the Senate, of different cultures all having a voice. Before the Emperor took over, and all the soldiers looked the same…

More photos and thoughts below!

The devolution of the Emperor.

Speaking of the Emperor, I really liked their display of his increasingly evil, hunched stance, his more sinister outfits. From Senator on the left, through Chancellor, to Sith Lord and Dictator. And eventually, the solid black in the original series… 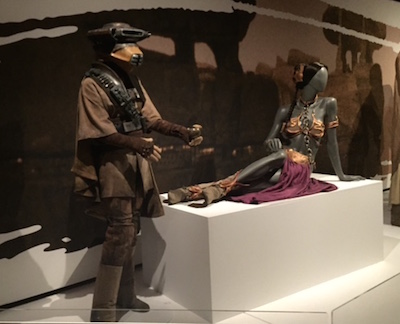 The two sides of Princess Leia.

They also had some costumes from the original series, but there were far fewer of these in the movies. Some of the most interesting are Princess Leia. In the first movie, she had her simple, modest white outfit (and bunhead). But more interesting is juxtaposing these two outfits, as the exhibit did. One is the Action Princess, there in disguise to save everyone. The other is the slave, forced into a sexualized look – which she uses to kill Jabba the Hutt.

And then Darth Vader got his own little room, just when you thought he wasn’t there… Such an iconic villain look. This is what the Dark Side looks like. Ya know, dark. The helmet. The strange controls. The breathing then. All together for one of the classic villain looks of all time…

We looked and looked through the exhibit, though, and something was missing. Everyone’s favorite mercenary. Where could he be? Then, out in the rest of the museum, we found him.

If you want to talk about the power of costume, how about Boba Fett? A character who barely has any screen time – and even fewer lines – and yet he’s a fan favorite. A lot of that has to be his utterly badass look. Cobbled together, vaguely camouflage, and as they point out – made to resemble, in parts at least, Jango Fett’s (his father’s) outfit. Well, perhaps the reverse – Jango’s was made to look like a clean, single-outfit version of Boba’s piece-meal outfit.

So what do you think – do the science fiction clothes make the science fiction man? Is costume as important in other stories as it is in Star Wars? Let me know in the comments below! And if you’re in the Seattle area, there’s a few days left on the exhibit – it closes October 4!