Bilbo’s encounter with the giant talking spiders is one of the most important episodes in The Hobbit for a number of reasons. I’ll focus on three of them today, and look at specific passages where Bilbo puts on and removes the Ring as I move through this episode. 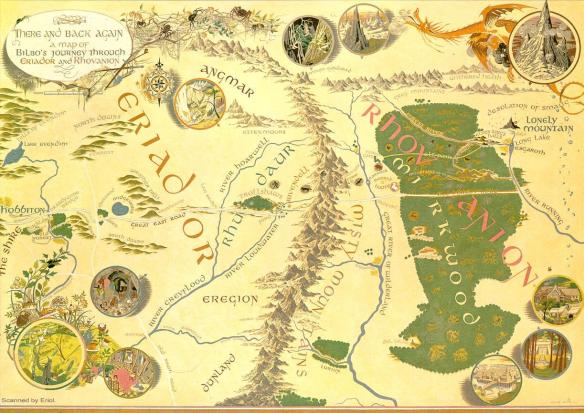 After being separated from the dwarves in the confusion of the elf-feast, Bilbo sits down and dozes. He wakes to find a huge spider binding him with webs. He manages to pull his sword and kill the spider all by himself. I can’t be sure without carefully parsing the goblin chapters again but I think this is Bilbo’s first kill, and it’s the encounter that prompts him to name his sword Sting. It’s clear that this is a significant moment for Bilbo:

Somehow killing the giant spider, all alone by himself in the dark without the help of the wizard or the dwarves or of anyone else, made a great difference to Mr. Baggins. He felt a different person, and much fiercer and bolder in spite of an empty stomach, as he wiped his sword on the grass and put it back into its sheath. (1)

Bilbo is more confident now than he’s been since he left Hobbiton, and the Ring has nothing to do with it. He’s also in a position to search for the dwarves. He takes a lucky guess about the direction he heard their last screams come from, having first “slipped on his ring.” The role-playing nerd in me is thinking Bilbo just gained a level of experience. (2) 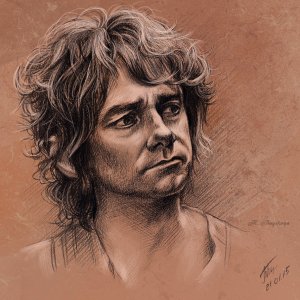 He finds the dwarves trussed up in webs. A swarm of giant spiders is having a conversation about how best to kill and eat them. This whole encounter echoes the incident with the trolls – only this time it’s Bilbo instead of Gandalf who comes to the rescue. (3)

Invisible Bilbo kills two spiders with thrown stones, then leads the spiders away from the dwarves just as they are about to kill Bombour. He taunts the spiders with silly rhymes, leads them into the forest, then circles back, surprises and kills the one spider who stayed behind to guard the dwarves, and frees the dwarves from their webs just as the rest of the spiders return. There’s a battle. Aside from their knives, the weary, poisoned dwarves have only sticks and stones. The spiders begin to encircle the whole group with a fence of webs. (4)

Bilbo, having taken off the Ring to free the dwarves, sees that he’s going to have to put it on again to win the battle, and has no way of doing it without the dwarves seeing him disappear. So he warns them:

I am going to disappear, he said. I shall draw the spiders off, if I can; and you must keep together and make in the opposite direction. To the left there, that is more or less the way towards the place where we last saw the elf-fires.

It was difficult for them to understand . . . but at last Bilbo felt he could delay no longer . . . He suddenly slipped on his ring, and to the great astonishment of the dwarves, he vanished. (5)

This is the first time Bilbo uses the Ring as part of a strategy. Up to this point, in every instance that he’s worn it, it’s either slipped onto his finger (seemingly) of its own free will, or he’s used it to hide from danger. In this instance, the invisibility is a sort of armor. And of course, now there must be a conversation about it with the dwarves when all this is over.

He tries to lead the spiders away again, but some of them pursue the dwarves, who are in no condition to run or fight. Bilbo circles back, flanks the pursuing spiders, and goes total badass on them.

He darted backwards and forwards, slashing at spider-threads, hacking at their legs, and stabbing at their fat bodies if they came too near. The spiders swelled with rage, and spluttered and frothed . . . but they had become mortally afraid of Sting and dared not come very near . . . It was a most terrible business, and seemed to take hours. But at last, just when Bilbo felt that he could not lift his hand for a single stroke more, the spiders suddenly gave it up, and followed them no more, but went back disappointed to their colony. (6)

Bilbo changes so much by the end of this story, it’s increasingly easy to forget he’s the same polite, nervous, comfort-loving creature Gandalf approached in An “Unexpected Party.” I locate the most drastic part of the change in this battle. Bilbo’s been lucky (I’d love to know how many times the word “luck” appears in the text – it seems to be on every page) and clever all along. Now he’s found his physical courage and proven he can keep his wits about him in a crisis. The dwarves are fortunate to have him, because they seem to have trouble with that. (7) 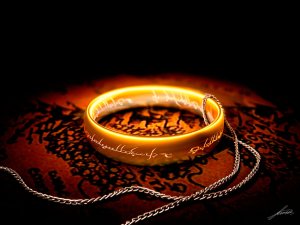 What I can’t say, really -– because the language of the text doesn’t give me much to go on – is how much the Ring influences Bilbo’s behavior here. Certainly, the invisibility is required to make his plans work. But the Ring seems to be lurking in the background and functioning as a simple magic item. If I did not know the story of The Lord of the Rings, I would probably have forgotten all that slipping on and off Bilbo’s finger from “Riddles in the Dark” by now. (8)

When the spiders flee, the company finds themselves in one of the circles where the elves had been feasting the night before. Bilbo explains the finding of the Ring to them. He’d told them about Gollum just after the escape from the Misty Mountains, but left the Ring out of the story. (I missed this one, and I am sure there are interesting things to say about it.) (9)

The conversation shifts to finding food and figuring out what to do next, and we get this gem.

These questions they asked over and over again, and it was from little Bilbo that they seemed to expect to get answers. From which you see that they had changed their opinion of Mr. Baggins very much, and had begun to have a great respect for him (as Gandalf had said they would). Indeed they really expected him to think of some wonderful plan for helping them, and were not merely grumbling. (10)

The dwarves are suddenly looking to Bilbo for leadership. And this is interesting: if you follow the dwarves through the first half of this novel, they do not change. The trouble with the elves and the spiders is the same sort of trouble they had with the trolls. They are prone to being out-witted and vulnerable to ambush. In the absence of Gandalf, Bilbo is the smartest, most savvy person in the group at this point.

Sadly, Bilbo is too exhausted to think of anything, so they all pass out in the elf-circle. At some point later, Balin pops open an eye and realizes no one has seen Thorin since the confusion with the elves the night before and the narrative shifts to a descriptive passage explaining that he’s been carried off to the dungeon of the Wood-elves. (11)

We’ll leave them for here for now.

All page numbers are from The Hobbit this week.