Welcome to round three of Sourcerer’s Eleven. An interview series where contributors within the site get a shot in the big chair. The Instigator-In-Chief, Gene’o interviewed Luther Siler, who then put me through my paces, so now it’s my turn *rubs hands together*. In the hot seat today is Joshua Robertson, author of Melkorka (Book 1: Thrice Nine Legends), and A Midwinter Sellsword (Book 1: Hawkhurst Saga). 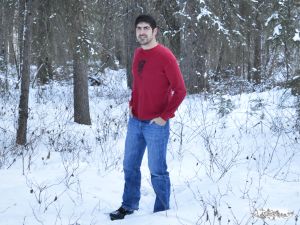 You will have to forgive me if I momentarily nerd rage. The story of Hawkhurst was never intended to be in my collection of stories. Hawkhurst first began as a politically-themed RPG MUD (Roleplaying Game Multi-User Dimension) played through text on a web-based platform. I spent an entire weekend creating a complex city from the ground up – detailed with theological and political underpinnings – vibrant with unique shops, guilds, and NPCs. Unfortunately, the group of players only were able to engage in the game for a few weeks. I could not let the creation go to waste, so I started restructuring the themes of the plot into an engaging tale. 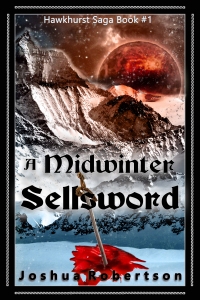 The series is about Argus, the bastard child of House Madrin, who ran away from Hawkhurst years ago after being enslaved as a gladiator. Argus is tricked into returning to the underground city. He soon finds himself trapped and subjugated to the political games between the noble houses. In desperation, he is forced to trust old friends with hopes to escape again before anyone discovers his true identity.

That’s a great origin story, and an extremely rewarding outlet for the nerd rage! For the plotters among us, it’s a dream come true – a whole platform with which to expand on. Those who know you, will be aware that you began crafting the world for your dark fantasy series Thrice Nice Legends in 1999. I really like the fact there’s a fan site for the series, and a TnL tabletop game. I’m going to leave the gaming element there for now. There are several contributors at Sourcerer who will be chomping at the bit to ask you questions so we’ll leave it for the thread!

Ooo…there is a good question. You weren’t kidding about the hot seat! The TnL Game originated from a collaborative plan back in 2013, where my world was used as the primary setting. The game continues to be tweaked and play tested, but to answer your question – JC Boyd, the co-author to Anaerfell (the standalone novel) is also my partner in the TnL game. He and I developed an idea for a book in 2004 and Anaerfell is the final result of that original idea. Thrice Nine Legends will soon be better described as a shared universe (much like Dragonlance) with a series of stories taking place in the same world. Melkorka, Dyndaer, and the final book, Maharia (set to be released in 2017), will be a trilogy within The Kaelandur Series.

That would be incredible. When I sell just one book, I’m like an 80s child discovering Q-Bert for the first time. If my stories ever made it to film, my mind would be blown! [And, I’d beg to be an actor in the movie.] As for keeping it straight, I wish I had something cool like JARVIS, but my budget only goes as far as sticky notes (the computer-widget kind). In all seriousness, I stick to a structured schedule for gym, writing, editing, publishing, marketing, family, and so on. I only deviate to fill the coffee pot.

There have been several illustrators who have created rough concept art for Thrice Nine Legends, but there are no pictures of the characters found in the stories. I would be thrilled to have some fully framed, canvas images of the characters to hang up around my house. But, yes, I have files upon files of detailed character profiles. I have a short biography on each character that outlines their homeland, family and upbringing, major childhood events, adolescence and training, religion, romances, and motivations for the plot. The motivations are the most important! My kingdoms, cities, and other settlements are far more detailed than the characters, mirroring the same complexity as Hawkhurst. I have folders embedded in folders embedded in more folders that have been created over 15 years. However, despite all the information known about the world, a writer has to be clever in how the world is discovered with their characters. I once did a short interview on Building World and Story.

I have to consider my main character, Branimir. He could not only use a little acculturation into the world of humans, but he would be the most appreciative of the experience. Branimir has a free spirit, rarely bound by any personal ambitions. He is extraordinarily blameless and kind, but he is also quite inquisitive. This would make him ideal in venturing through our world. I think his long life span and natural curiosity would set him up to be an archaeologist, a historian, or a world traveler.

I would give most credit to Matrim Cauthon, who is a character in Robert Jordan’s Wheel of Time series. Mat is a roguish guy who is all about women, gambling, and drinking! Today, I meet several folks that grew up with Harry Potter. Well, I grew up with this brazen kid from Emond’s Field and lived vicariously through him.

Other characters that have stuck are between fantasy and science fiction genres: Gandalf, Han Solo and Chewbacca, He-Man, Ender, and Spock. I know – some all-time favorites for many geeks in that line up. Beyond that, there are a handful of characters that I have played in Dungeons and Dragons for almost twenty years that are close to heart.

That is an easy one, Melissa. Keep writing! There are many tidbits out there to help a writer hone his or her craft, but the number one thing that any author can do is to keep writing.

The only thing that comes to mind are random facts, like I always order a 5-layer bean burrito when I go Taco Bell or I’m one of the two members of my family tasked to be the ancestral historian (very enjoyable!).

I have yet to find any writers in the long history of my “family tree”; we have oodles of farmers. However, we make up for it in my immediate family. My older sister wrote stories when she was younger. My younger sister is currently working on her first novel. And, JC Boyd is not only my best friend and co-author, but he is also…[drum roll]…my younger brother.

Is there a restriction on the sentence length? Wait! Did that count as one?

There was a time when gods were gods and men were men. Before legends divided truth from untruth, love from hatred, or the righteous from the wicked, the world was nothing but a veil of myth and misconception. It is heroes who defied what it meant to be a man or a god, seeking a purpose for themselves and humanity. My stories are about those heroes and their legendary adventures.

Besides the infamous Horn of Bubbles from DnD? 🙂 I choose the Ring of Gyges introduced to the world by Plato. The story explains that this ring gives the power of invisibility to its wearer. In addition, the owner may forever have whatever they touch as though it were their own. There is some speculation the tale of the Ring of Gyges was the inspiration behind Tolkien’s LOTR.

Thank you so much, Joshua. I’ve thoroughly enjoyed chatting with you, and I look forward to the conversation in the thread – I know people will have plenty of follow up questions from this engaging interview.