This is the inaugural edition of a new feature: author/blogger interviews. Today I’m chatting with Sourcerer contributor Luther M. Siler, author of The Benevolence Archives and Skylights. Luther has graciously agreed to conduct the next interview.

1. You’ve just released The Sanctum of the Sphere, volume two of The Benevolence Archives. Can you tell us a little about that series and how it came about?

I read an interview with Brian K. Vaughan, writer of the excellent comic book sci-fi series SAGA, right after George Lucas sold Lucasfilm to Disney. Vaughan made a point that resonated with me immediately: instead of getting mad at Lucas for doing what he wanted with what was, after all, kinda HIS stuff, why not channel that energy into making up our own stories? I don’t know that he specifically used SW as inspiration, but the question that ended up leading to the series was “What would happen if Han and Chewie just took off after getting Luke to Yavin?” Some fiddling and, boom. Benevolence Archives.

2. What geeky goodness do you have planned for us next on the fiction front?

My next book– at least tentatively– will be a nonfiction book about teaching called Searching for Malumba. I foresee that coming out late fall or early winter 2015. If it comes out. I’ve tried to write it before and failed.  After that, probably the sequel to Skylights, and wrapped around that will be some more Benevolence Archives short stories. My plan is for the third BA book to be another short story collection, although release for that is unlikely until 2016 at this point.

3. Do you see yourself ever expanding your fiction beyond sci-fi?

Absolutely. There are a few short stories on my blog that are pure fantasy, and I’ve even got one published that’s got no science fiction elements to it. My first love is fantasy, and truth be told I read MUCH more fantasy than I do science fiction. I dabble in horror from time to time as well.

Then again, I also like to blur genres. My sci-fi has gnomes and ogres in it so if I write a fantasy novel there will probably be an alien invasion halfway through.

In fact, that’s mine. You can’t have it.

4. Our friendship began with a few conversations about blogging and e-publishing, and you’ve been successful at both. Do you have any Jedi wisdom on book production or marketing to share with those of us who are thinking of jumping into the publishing game?

Shamelessly steal ideas from people who seem to be doing things right. Interestingly, that’s my most common piece of advice for teachers as well. It works for both of my careers!

5. Why did you get into blogging? Was it to give your writing & publishing a boost, or, is there a more serendipitous origin story?

I need to write, as you may have noticed; my logorrhea appears to be exceptional even among bloggers. Writing fiction is really, REALLY hard. Writing nonfiction is not. Thus: blogging. My first blog was over at Xanga, and lasted five years or so; it came about when a classmate in my grad school program suggested a bunch of us start them and a year later I was the last man standing. I’ve had an active blog for most of the last eleven years.

6. You do book reviews from time-to-time. In your own opinion, what is the best review you’ve done so far?

I actually think I’m bad at reviews, to be honest. That said, I’m good at hating stuff, and my review of the movie Snowpiercer has several times more hits than anything else I’ve ever written at infinitefreetime. It’s actually the first Google result if you search for “Snowpiercer terrible.” No joke. Book reviews? I really enjoyed reviewing Katherine Addison’s The Goblin Emporer, mostly because my review says “This is good, read it, ignore the rest of the review” and then complains for like 1000 words.

7. What’s the most fun thing you’ve ever done on Twitter? 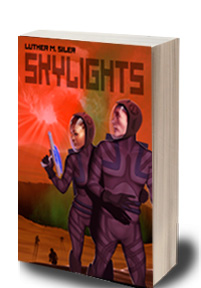 I recently got into a minor kerfluffle– or perhaps a debate, if we wanna get highfalutin’ about it– with a published author about self-promotion by independent authors (context here) and she actually ended up positively retweeting the article and we had a brief conversation about it. Halfway through that conversation James S.A. Corey jumps in to say he could never cut it as an independent writer and he can’t believe how hard I seem to work to sell my books.

James S.A. Corey (well, he’s two guys, technically, but only one of them runs the Twitter feed) has a goddamn TV deal and has written several books that I like A LOT, and I somehow managed to NOT insist that he take free copies of my books and read them and make me famous. This may have been a mistake.

And I may have peed a little.

Character? Chewbacca. Story? If I don’t include Star Wars, which isn’t pure sci-fi anyway, it’d have to be The Hitchhiker’s Guide to the Galaxy. My publishing company isn’t called Prostetnic Publications for nothing.

9. Would you share with us a little about the first piece of creative writing you ever attempted?

Fifth grade, straight D&D dungeon crawl. I remember stealing the verbal component to spells directly from Dragonlance — the phrase “Ast Tasarak Sinuralan Krynawi” has been burned into my brain for a very long time– only in my story it was the words for a fireball, not a sleep spell.

I suspect it was not a very good story.

10. Give us your best pitch elevator pitch. In four sentences or less, why should we read your books?

Because I am a grown-ass man with a beard and I will cry RIGHT HERE IN FRONT OF YOU if you don’t. Do you want me crying? Nobody wants to see a crying fat man. So save us all some trouble and go download my stupid little book.

11. If you could own one (and only one) piece out-of-this world technology or magical artifact, large or small – anything from the simplest magic wand to a Death Star — what would it be?

The Infinity Gauntlet. Pretty sure I can do whatever else comes to mind once I have that. 🙂