Geeks. Batman. It’s a thing. He’s already taken up several letters of this Geek Pastiche, and I have a hunch he’ll appear in a few more before the alphabet is through… But heroes are only as good as their villains, so it’s fitting we take a moment to address one of the most famous supervillains in or out of comics: The Joker.

Ever since his first appearance in 1940, the Joker has been wildly popular. Like most villains, he was first written as a one-story character. He even died at the end, but when Batman got a solo comic, the Joker became one of the first comic characters ever resurrected in order to boost sales. Since that time he’s been a mainstay of Batman stories in all kinds of media — from constant appearances in the comics, to endless animated variations, to the movie versions we all know and fear. Where you see Batman, you soon will see the Joker. Fans even complain about overexposure, but I contend that the Joker is such an integral part of Batman that they’re narratively inseparable — where there is Batman, there must be a Joker.

From the beginning the Joker has reflected Batman, and not in a superficial way. (That would be Man-Bat.) The Joker is Batman’s thematic funhouse-mirror reflection… In some ways, the two are always identical. In others, they’re opposites. 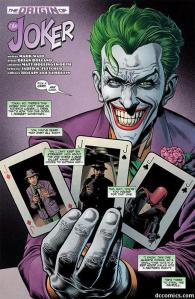 Batman famously lacks superpowers. Because of his appearance, it’s sometimes forgotten that the Joker isn’t “super” either. They’re both human men, driven to transform themselves into larger-than-life characters for dramatic effect. They’re both, for lack of a better word, insane. On the other hand, even in the lightest and campiest of stories Batman is a fundamentally serious person, and you need something wild to counter that. There’s one vision of total control and another of complete anarchy. One man whose origin is so codified as to be mythical, against another whose whole life story is constantly changing even in his own memory. One wealthy gentleman in a manor house, and one spectre happy in urban squalor.

On still another thematic level, the Joker is the perfect Batman villain because, while he is Batman’s equal and complement, he is also everything Batman fears: Meaningless and unknowable. He’s the monster who kills children and laughs about it, for no reason at all. Someone who can’t be punched into submission, because he has no motivation. He’s the ultimate challenge to Batman’s fundamental desire not to kill — because what else can you do with him?

Plenty of other great Batman stories exist, and there are any number of fantastic new stories waiting to be told. The Joker will forever reappear, though… Because you can’t tell the perfect Batman story without him.

ed. – Hannah’s Blogging A to Z this month at her own blog, Things Matter, and you can find her on Twitter at @HannahEGivens