As someone who had not read too many comics I only was tangentially connected to the comic book world and therefore did not know much about the Flash, besides being the fastest man alive. When the show Flash started on the CW I got excited mostly because it was by the same people who brought us Arrow, which I love. The only thing being that I really did not know much about Barry Allen or the Flash in general.

The more I find out the more I really love the Flash as a character! A lot of what I know comes from watching the show, but I have also looked at what others have posted and watching some of the cartoon movies. The Flash really has a heart that is different from some of the other characters in the universe.

One thing I love about Barry Allen is his optimism and his passion. Now maybe this is just the show, but other things I have seen and found seem to confirm this as well. Recently we watched the animated movie Justice League: Doom, that points out the weaknesses of various DC superheroes including the Flash. The Flash’s weakness is his need to protect others; this is demonstrated in that movie and in the show. At the same time of all of the weaknesses it is the most endearing. He just wants to protect people and for those that need help he wants to help. 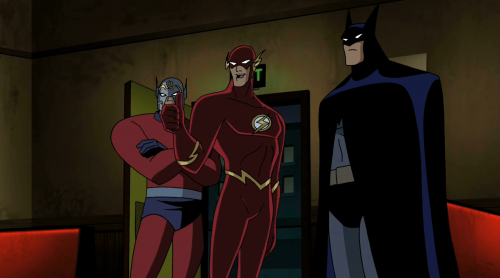 From a full gif-set on Tumblr.

There is a great Tumblr post that I saw recently that looked at an episode of Justice League Unlimited where Batman and Orion try and help the Flash out because they disagree with how he handles his enemies. At the same time they just want to come and beat everyone up. The Flash on the other hand can take some time and is able to talk to one of the enemies. This in turn leads him to the rest of the enemies that are trying to kill him. Even getting the one enemy that he talked to to turn himself in. It really is a great moment and contrasts so much with the other superheroes.

The great part about Barry Allen is that his optimism and passion is infectious. He is too smart for his own good, but his strength is not in overpowering an enemy, but outsmarting them. Also, at times his power is the fact that he legitimately cares what happens. It is so different from other superheroes, particularly those in the DC universe. It is kind of a refreshing change of pace, especially when it is contrasted with Arrow which does get incredibly dark and serious. Flash presents a world where so many things are possible.