Hi everyone! It’s Rose back again with another installment of We Have the Power. Today I’m going to shift to talking about She-Ra.

I remember finding out that Filmation was doing the He-Man spinoff as clearly as I remember my introduction to He-Man itself. My parents had gotten us a subscription to He-Man Magazine, and somewhere in the winter 1985 issue, we found this ad for The Secret of the Sword.

Today, there are lots of concurrently running iterations of the same franchise.  See the umpteen procedural dramas with spinoffs, like CSI or the more recent Chicago Fire/Chicago PD (soon-to-include Chicago Med?) In the 80s, a spinoff usually meant the original show was ending its production run, and that’s what happened with He-Man. So, as a He-Man fan, I had my share of resentment toward the Princess of Power.  But I also wanted the story to continue, and She-Ra was promising that.  (Sort of.) 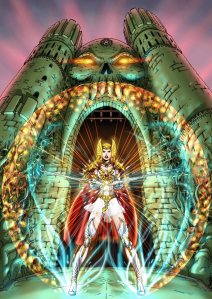 This is my favorite piece of She-Ra fanart ever, by Killersha @ Deviantart. Click the image to visit full size on her gallery.

We heard somewhere that Filmation and Mattel wanted to do a show “for girls.” That annoyed me.  As far as I was concerned, there was plenty in He-Man for girls to enjoy. Even as a kid, I disliked gender-based marketing.

That was probably because I rarely liked any of the cartoons that were explicitly marketed to girls.  They were usually pink-ified, and featured a bunch of cutsey characters having interpersonal problems instead of what I thought of as “serious problems”– fighting bad guys and exploring strange and exotic places. (Rainbow Brite did have a pretty good adventure angle and the villains weren’t half bad by 80s standards, so I did watch that one from time to time.)

I thought, if Filmation wanted a “girl” show, it could easily have done one focusing on Teela and her relationship with the Sorceress and/or her duties as Captain of the Royal Guard.   Apparently, though, the color palette in Eternia wasn’t “girly” enough, so instead they were going to switch planets and lighten everything up.  While they were at it, they were going to throw in horses.  Because, as everyone knows, girls love horses.

Well. I do love horses. And I had to admit that I did like the way She-Ra was designed. She wasn’t wearing pink, and she didn’t have on a bathing suit. She looked feminine without being cutesy, bubble-headed, or drawn to accentuate her sexuality.  I liked the idea of a woman with similar powers to He-Man, and I liked the design of her sword. I knew that her headdress was an obvious re-working of an earlier character design from Masters of the Universe, and the She-Ra had a lot of physical similarities to Ileena. 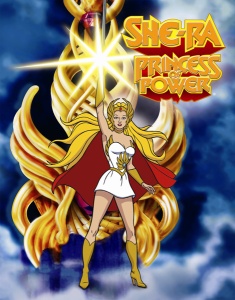 But it didn’t bother me because

My sister was excited about She-Ra from day one, and I figured that if He-Man was going to end production, at least a spinoff would let us continue the story in some way. I decided to give She-Ra a try, and if you know me at all, you know that she won me over in a big way.

2 thoughts on “We Have the Power: A Masters of the Universe/Princess of Power Memoir #4”