We have Diana to thank for this theme. I started planning in October for an A to Z Challenge with 12 contributors. It worked. The way we did it was I picked a few topics we write about often, invited some of my geeky friends to take those topics, and once we had enough of them nailed down to be sure we could do this, I invited the other contributors to take the letters that were left.

Once the topics were in, I set about reverse-engineering a theme. Then I asked the group privately what they thought of it, and we had a conversation. The original theme I came up with was “Pop Culture Potpourri,” but my beautiful sister, who happens to be one of Stormy’s Sideckicks, dropped this line on the thread:

And so that is our theme. The links below will lead you into our archives and to the front pages and about pages of the bloggers who are contributing here next month. Just whatever you’re looking for, we’ve got it! We’re going heavy on comics, tv, and books, because we excel at those.

We do have one music post the first week (written by me), and a couple of Tolkien posts, (I love me some Tolkien.) I’ll even tell you which letters the contributors are taking. But if you want to know the actual topics, well. Tune in next month. 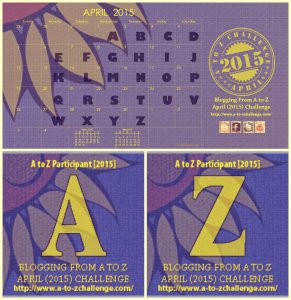 Contributors are listed by day. Some appear more than once. Some are regular contributors, some are guest bloggers.

And by the way. #GeekPastiche is registered to me. Contributors who are doing A to Z at your own blogs: tweet your posts to #GeekPastiche along with #AtoZChallenge. Other geeks and nerds who are looking for friends AND blogging A to Z in April: do the same.

Only links to geeky or nerdy A to Z posts, please. If I you send a link to that hashtag, I visit it, and I ask you to show me the geek, you must have an argument. And, at least until reflection day, if it don’t relate to A to Z, it don’t belong, though chatter is welcome. Respect the rules of this hashtag. please.

I’m not going to police this very hard or define geek and nerd for you, but you know what I mean. A post about your favorite cake recipe is not a geeky post. But if you include a photo of the cake, and it’s an R2-D2 cake, well, that’s some nerdery going on right there and I’ll probably comment on the post 😉 I’m going as inclusive as I can with this, but there must be a minimal standard.

If enough people use #geekpastiche to make it worth paying attention to, we’ll do other stuff with it over the summer and invite more geeks and nerds to play games with our hashtag.

Yep. Rolling out a sparkly new hashtag with the A to Z theme here. And that is not the only one I’ve registered lately.

Want to see what we’ve got? Read a random post from our massive archive!

61 thoughts on “The Great and Powerful Blogging A to Z in April Theme Reveal . . . It’s a #GeekPastiche!”