And here we are, sadly, at the end of another season of House of Cards, and it’s been a bit of a perplexing one, full of intrigue, Russian diplomats, and Kevin Spacey’s confusing but charming accent.

This was one of the weaker episodes for me, partly because you could just feel heaviness in the writing, clunkiness in threads coming together to set us up for the end of the season.

Frank’s campaign is in trouble, especially after the debacle that sent the Jordan Valley into crisis. At a town hall along the campaign trail, Frank answers questions—or sort of. Most of the questions are things he can’t or won’t answer. Remy suggests screening future questions, and I’m wondering why as many politically savvy folks as this with a sitting president in a disastrous situation weren’t already doing that.

Back home, Frank gets a Message. Tim called. Anyone remember Tim? If you’ve seen season 1, you do–Tim is Frank’s former lover. And Frank panics when he returns Tim’s phone-call and is told that Tom Yates called to ask for an interview.

Elsewhere, Frank continues to lose his head. The Jordan Valley situation is escalating, and Petrov announces that he will violate the Israeli no-fly zone in his personal plane. For some reason, Frank decides that’s a fantastic idea and decides to follow.

Claire, of course, warns against this. But Frank ignores her and suits up in Kevlar and a helmet. This is all The Most Ridiculous Thing because no sitting US president in modern times would have a tiny convoy in a superbly dangerous region of the world, protected by a Kevlar, a helmet, and about 3 armored vehicles.

Anyway, once he’s in Petrov’s bunker, the two start to negotiate. Frank agrees to scale back missile defense. Petrov has a difficult condition, though: Claire’s removal as UN ambassador. There’s this sort-of masterful moment when Petrov adds another layer to things by calling into question the Russian involvement in the bombing. Perhaps, Petrov suggests, they played Claire, and in doing so, played Frank.

When he returns home, Frank delivers the bad news to Claire. And then there’s Yates to deal with. The two have a few drinks together. They gaze a little-bit longingly at one another. They talk. Frank reaches for Yates’s hand. But then he sends him home.

Claire, meanwhile, is not only no longer UN ambassador, but is with a team of UN advisers who have news: the public likes Claire’s hair better blond. And so blond she will be, despite herself.

Across town, Doug is finding something new, something he hasn’t had before, with his brother’s family—family of his own. He seems happy playing with his nieces. He and his brother seem on more even footing than before.

Gavin, meanwhile, fesses up to Lisa: he doesn’t have AIDS, and his name isn’t Max. He’s leaving town, though. She should be safe, but if she ever gets in trouble, she should call—and he gives her Doug’s number. He also leaves a guinea pig with her—pretty sure that’s Cashew.)

Claire is back to the role as FLOTUS, even if she’s not quite back to the role of adoring wife. One of the things that has marked season 3 is the growing gulf between Frank and Claire, and we get quite a bit of emphasis on that in this episode. At a fund-raiser, the women question how they can trust Frank; Claire assures them that even were they not married, she’d trust Frank. I get the feeling that’s really the opposite of what’s true, though.

Frank, Jackie, and Heather are readying for a debate between presidential candidates that will air on CNN. Frank wants Jackie to go after Dunbar for the wealth she was born into and for sending her children to private school. But Jackie now has step-kids, and they’re in private school, too. She’s not sure about the tactic. (And it doesn’t make much sense, honestly.)

She plans a covert meeting with Heather Dunbar. “I want to endorse you” is the message—but only if you’re willing to give me something I want in return. A Cabinet position, perhaps. But Heather Dunbar isn’t willing to play that game, and Jackie isn’t prepared to leave Frank’s side without a guarantee, so all is as it was.

And then it’s time for the debate. Claire is watching from a campaign office full of Underwood supporters. Yates is with her. Jackie, Heather, and Frank are onstage. As planned, Jackie hits Heather Dunbar hard about her background and where she sends her kids to school.

When the debate turns to Claire’s appointment as UN ambassador and the recent mess in the Jordan Valley, Claire doesn’t want to watch anymore. She leaves. The debate turns back to the kids, specifically that Heather’s kids are in boarding school—“maybe you didn’t want to raise them yourself” Jackie tells Heather. A collective gasp, and we know Jackie’s done. “Jackie, don’t your kids to go private school, too?” This from Frank.

Across town, Doug gets a message from Gavin–Rachel is still alive, and he’ll tell Doug where she is after he gets Gavin’s friend out of prison. I can’t help but think that this is a Bad Move for Gavin.

Jackie demands to see Frank, angry about his jab at her. He’s imperious, reminds her that they’re not equals. And Jackie says fine. Then we see her on TV. And she’s endorsing Dunbar. Remy, who we’ve already seen struggle with Frank a few times, issues a warning. And then he leaves.

And Yates is with Claire, who is donating blood as part of campaign photo-ops. He asks why she works so hard for Frank, especially after being fired. Claire, for her part, still seems suspicious of Yates’s relationship with Frank. Claire, who is clearly about to pass out, makes a rather important revelation: every 7 years she reevaluates the relationship, like it’s an office—and it IS an office.

Naturally, Frank’s solution to the issue is to fire Yates and insist that he never publish the book. That’s more than ridiculous, and more than a little unenforceable, but Frank reminds Yates of what he knows—the first novel isn’t his.

On the campaign trail, it becomes clear that Frank and Claire are drifting further apart without Frank even being aware that it’s happening. But they’re in separate bedrooms. When Frank speaks warmly to Claire, she is cold.

Dunbar is ahead in the campaign, but only barely—and poll numbers are always expected to off by several points. Dunbar wants something that will guarantee her as the front-runner for the election. And that’s when she remembers the diary that Doug showed her earlier, the one that proves Claire lied about her abortion on TV.

Dunbar meets with Frank in the grubby little stairwell that served as a cigar room for Petrove and him. She tells him that she knows that Claire lied, that she has the journal that will prove it. Dunbar has impressed him—but Frank is a dangerous man to impress. On the way out, we get an aside that he’ll kill her if she harms Claire. We know he means it.

Jackie and Remy are now both officially free of Frank. They’re not free of one another, though, and we’re left wondering what this will mean for Remy, for Jackie, and for Jackie’s still-new family.

Kate and Yates are still sleeping together. He wants Kate to write a story about his book, about Frank’s attempt to suppress it, but Kate won’t. Conflict of interest and whatnot.

Claire, meanwhile, is going door-to-door in Iowa. In one of the most bizarre exchanges of the season, Claire meets a new mother whose politics do not align with Frank’s whose “Underwood 2016” signs in the yard are her husband’s. She goes into the woman’s house, and there’s dialogue about cheating, philandering, abuse—-all the things that Claire is dealing with, too, but without the means to escape that Claire has.

Not long after she leaves the woman’s house, Claire’s phone rings. It’s Frank, telling her that about the journal. He’s already working on a solution. But Claire’s hit a breaking point.

Meechum finds Doug, who has the diary with him. He rips out the page about the abortion and burns it. He wants to come back. But how can Frank trust him? He just burned up $2 million. 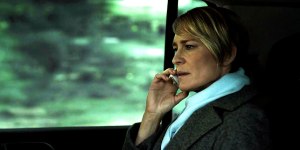 Oh, there’s Rachel. She’s in New Mexico, working at a bar and at a supermarket and living in a dormitory/halfway house. She’s “Lisa” now, and she’s just gotten the new paperwork to become, permanently “Cassie Logan.”

But Doug, who is back in the president’s good graces, is looking for Gavin. He finds him in Venezuela and beats Gavin until he reveals Rachel’s location. From there he heads to New Mexico, where he buys a beat up van and then goes to a hardware store and buys everything on a Murder Shopping List: shovel, bleach, duct tape.

In their hotel, Claire demands that Frank be rough with her, that they have sex. She also demands that he look at her. He can’t. He calls and has her a room of her own made up and suggests she go back to Washington.

She does, and then she refuses to join Frank when he calls and wants her to return to Iowa. She refuses to answer his calls. She meets with Yates.

In New Mexico, Doug snatches up Rachel. She pleads to be released, even after he ties her up and throws her in the back of his van. But Doug can’t fail Frank again. He drives the van to a secluded spot in the middle of the desert. It’s beautiful, and lonely. He starts to dig a grave. For a few moments, we think he’ll change his mind. He even does, briefly, as he lets her go. But he can’t do that. She has to die, and the last we see of them for the season is Rachel’s body being buried, Doug shoveling dirt over her face.

Frank beats Dunbar in the Iowa primary. Claire is still in the White House, refusing to come out, and he must give his victory speech alone. He does so at campaign headquarters, saying she isn’t feeling well, and things go relatively well.

But back at home, things go awfully. He throws a tantrum. He wrenches Claire’s face to the side as he articulates the words, slowly and menacingly, “without me you are nothing.”

And that’s it. Claire has had it.

And that, folks, is where they leave us.