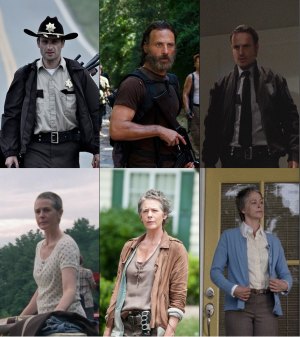 I am going to do my very, very best to make sure that this post is no more than 50% meme pics.  However, that is going to be very, very difficult to keep to, and I apologize in advance for whatever pain I may cause you.

PREVIOUSLY ON THE WALKING DEAD: Actual normalcy, fire-head zombies, and more actual normalcy.  Rick uses his gun as a cooking utensil and learns that sometimes it’s okay to follow directions.

We begin with our gang being let in through the gates of Alexandria.  Carl spots a girl in a house.  Daryl is suddenly terrified by a crappy CG possum in broad daylight and shoots it.

“Brought dinner,” he says to the guy who opened the door, and ten seconds in we’ve already got the line of the episode.  Alexandria apparently has speakers that pump the sound of children laughing out to the outside world, because it’s immediately apparent that other than Aaron and Eric and the other dude, there’s nobody around.  They try to confiscate the group’s weapons, a suggestion that they react poorly to, and Aaron says to wait until they talk to Deanna.

“WHO’S DEANNA?” Abraham bellows, in what I think is his only line of the episode, and he says it as if he knows it and wants it to be memorable.  Seriously, society just wouldn’t work if people reacted like this every time they heard the name of someone they don’t know.  It would be total chaos out there.

Rick says Sasha’s name, and she psychically knows that there’s a zombie a good distance behind her.  She turns and shoots it in the head.  I note Fr. Gabriel in the background; it may be the only time he’s even on screen in the entire episode.

We return in a nice little house, where Rick tells this Deanna person that his last name is Grimes and then immediately leaves a nasty gross handprint on her wall.  She films their conversation, because Alexandria is all about “transparency,” and fills him in on what’s going on.  She’s a former Congresswoman; Alexandria was a planned community, blah blah blah she’s never been outside the walls and they’re all safe.  There is a clarinet on the shelf behind Rick’s head, and it’s going to weirdly distract me every single time they cut to one of these interview scenes.

Anyway, “Deanna”, if indeed that is really her name, wants them all to stay.  Left unsaid: because they’re in huge trouble, but she really doesn’t say that and who knows I’m probably reading between the lines too much.  I’m sure everything will be completely okay.

First commercial break already, and we cut to a startlingly pudgy woman telling everyone that the guns are still theirs and they’re being stored for safety.  I mention her size for a reason; just like Aaron was safe enough to have a sense of humor last episode, these people have enough food and aren’t burning tons of calories just staying alive all day every day.  I have no doubt that this was a completely intentional casting.  Carol makes a big deal of having a hard time getting her machine gun off her shoulders and then puts it down pointing directly at the other woman, a silly grin on her face that turns immediately to calculated death when Rick looks back at her.

Aaron shows them their new houses.  They’re, bare minimum, $800K houses, so we’ve all upgraded a bit.  Aaron has a big bruise on his chin from where Rick punched his face.  I note that Carl and Rick still explore their house with one hand on their weapons.  Running water!  Granite countertops!  Shower scene!  And– oh, God, nooooo!–

He cuts himself, too, which for some reason feels like a nice touch.  He looks like freaking Iggy Pop when he answers the door shirtless a few minutes later; a blonde neighbor is dropping off a bunch of toiletries, and oh would you mind if I gave you a haircut? Because that’s perfectly normal and a thing we do around here.

So Rick gets a haircut too.

Cut to Daryl’s interview, easily the funniest part of the show.  Daryl hates Alexandria, guys, hates it so very much.  It has to be at minimum a couple of hours since Rick’s interview, and dude is still carrying around the possum:

He paces around angrily for the couple of minutes that they give him for his interview and then we cut to him disemboweling the possum on Rick’s front porch.  Is he gonna build a fire, too?  God does Daryl hate Alexandria.  The brain trust– that being Rick, Daryl, and Carol– meet in between two of the houses and agree that everyone’s sleeping in the same house tonight.  Meanwhile, Carl discovers that apparently there’s been somebody squatting in their attic.  Whoever it is, there’s a rope running out the window.  And they like comic books.

Nighttime.  Everyone’s in the same room, and a couple of them are conspicuously keeping watch.  I look specifically for Gabriel, who is nowhere to be seen.

This “Deanna” character swings by and busts the plan.  She’s got jobs for everyone, but she’s keeping them to herself for no clear reason at all.  There’s a weird in which I prove I know all your names moment.  Seriously, has no one noticed that Gabriel is missing?

Michonne’s interview, and she grabs a copy of Crime Without Punishment off the shelf, presumably stealing it at the end of the interview, which is nicely ironic.  The next day, everyone but Gabriel, who is still missing, is “exploring.”  Rick sees a dog.  So there’s at least one of those left.  Daryl won’t leave the house.

There is a good moment where Rick realizes he doesn’t know exactly where Carl and Judith are and freaks out.  Turns out they found some old people, and the old people are cooing over the baby.

Carl meets some other kids, including Enid, who hates them all and isn’t talking.  She’s “from outside” too.  Carl visibly kinda freaks at the idea of being asked to play video games, but quickly pulls himself together and joins the rest of them.  The next scene is Carl’s interview, where he says he killed his mom, but we don’t get to see “Deanna’s” reaction.

Cut to that night, where Rick takes a walk and is vaguely threatened by blonde haircutter’s husband, a threat that makes precisely zero impact on him at all.  This will be the first of two scenes in this show where people attempt to scare folk who have no fear at all left in them.

And then Carol’s interview, which is awesome.  Look at the look on her face.  She’s still playing useless hausfrau, and when next we see her after this scene she’s dressed like she is in the first picture up above.  She mentions she worked with kids; she does not mention that she was teaching them to stab.

Daryl still hasn’t had a shower.  Carol threatens to turn a hose on him.  Can we please please please actually have this scene?  Because it would be the greatest thing in the history of television.

Glenn’s interview.  “We were almost out there too long,” he says.

Speaking of out there!  Rick leaves the gates.  Carl looks out a window and sees Enid climbing the fences.  And he follows her.  Which means that Carl has had a house for one day and Carl is already not in the house, and this is the part with all the meme pics: 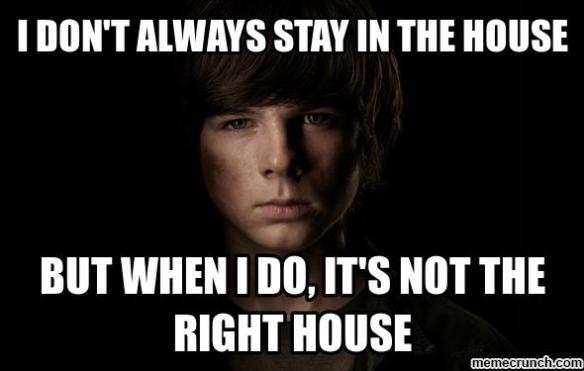 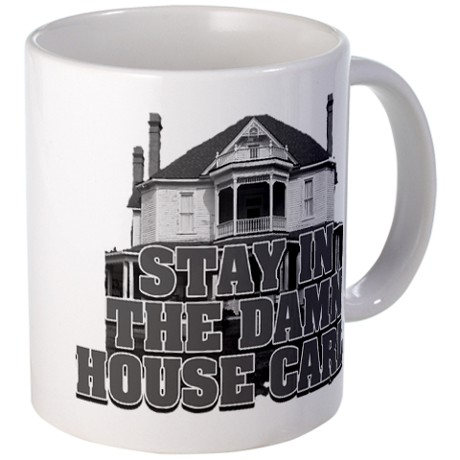 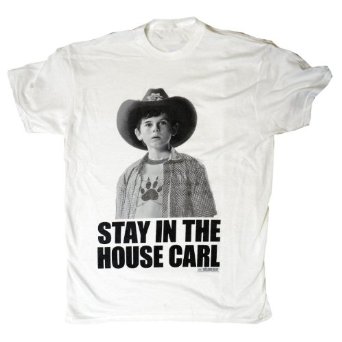 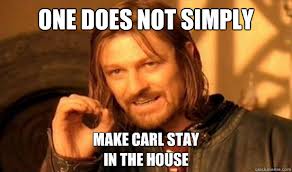 That last one is my absolute favorite, ever.  Meanwhile, Glenn and Tara and Noah (Seriously? Noah? The guy with the bum leg?) are being taken out on a “trial run” by a couple of douchebags so douchy that they even admit they’re douchebags.

Carl follows Enid, who he quickly loses.  Rick goes to find his blender-gun, which isn’t there.  What he does find is Carl, and some zombies, and hilariously he is not even the tiniest bit surprised that his son is outside the gates.  He seems to basically be killing the zombies for fun at this point.  I would too, if I’d had to go a whole day with no rotting blood on my clothes.

Meanwhile, Team Dbags are dbagging.  They’re keeping a zombie tied up, which is dumb, and Glenn & co. react predictably.   Dbag Prime yells at them the whole way back to town, and eventually is dumb enough to try and punch Glenn, which ends poorly for him.  Daryl just happens to be there, and his eagerness to murder a fool is palpable.  Did I mention Dbag Prime is her-name-isn’t-really-Deanna’s son?  He is.  She actually thanks Glenn for socking him.

(Neat CG moment while Tara is killing the zombie, by the way: she tries to grab it by the back and pulls off sheets of skin instead.  Eew.)

Rick, by the way, has just been appointed constable, with Michonne as his second-in-command.  He accepts, and in the next scene he’s back in cop uniform, which is creepy.

I wish I could get a shot of the last scene, which takes place on the porch at night.  Rick is standing in the middle in his new uniform.  Daryl is to his left, in darkness.  Carol is to his left, standing in a lighter patch.  Rick’s face is split in half.  And they’re talking about what’s to come next.