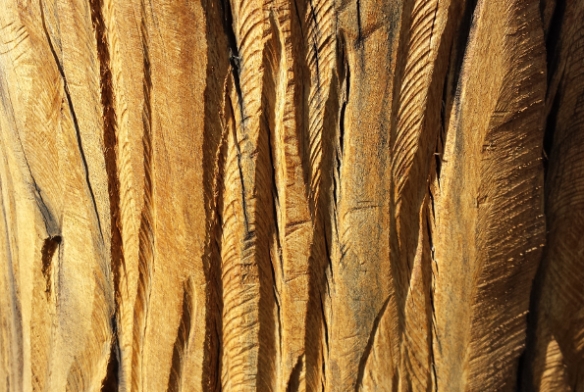 This is a “What IS This?” so just saying it’s wood won’t win the prize. You need a more detailed guess, or a funny one. I’ll post a photo of this object from a different perspective in my Wordless Wednesday tomorrow.

I honestly don’t know that I have much to say about this episode. It’s the penultimate episode, and like how the first two episodes aired together in one evening, I kind of feel like this episode and the last episode should have aired together. It definitely left me wanting to see where it all ends up, because this was definitely not a complete thought!

What this episode also showed was that it’s not Peggy Carter who has a lot of development to do as a character – it’s the “fathead male coworkers” (as Angie put it last week) who have growing and development to do. This episode culminated and showed a lot of that, up to and including a heart-wrenching sacrifice. So it’s these male characters, Sousa, Thompson, and especially Chief Dooley that will be more of a focus this week!

Nice job getting all the important players into one shot, directors.
Found on the review from The Mary Sue.

Note: I found some great clips from the episode directly from ABC, but they don’t embed well in WordPress. You should be able to click them to get to the video no problem!

At the start of the episode, we pick up where we ended before – with Peggy Carter in custody and being questioned by Agents Sousa and Thompson. It goes pretty much as you would expect – she tells the truth, they don’t believe it. She is calm in the face of it, because she believes that what she has done is right.

Meaning that she mainly reacts when they accuse her of the assassination of their fellow agent – she regrets that the most, but also was not the direct cause of it happening.

The agents go back and forth on believing her. She had built up some trust and respect from them in recent episodes, but not enough to withstand the evidence against her. So when Jarvis, traipsing in to save the damsel in distress, presents a story of a Peggy Carter who gave in to Howard Stark and his charms, well, they fall for it pretty quickly. Peggy, however, is disgusted with this and tells them as soon as possible that it’s a fake confession – rejecting that she needs saving and sticking with her story.

It helps that, as Chief Dooley tells her, they had begun entertaining the idea that Stark wasn’t behind it all – that they had finally reached the point that she wasn’t the only one who believed that. The things she uncovered in her investigation definitely helped get them to that point, though.

They never really get a chance to work through the back-and-forth, the questions of what to believe and whether to still blame her – though it does seem like her being kicked out of the SSR was pretty final. Because Peggy wasn’t the only one in the hot seat after the end of last episode – Dottie knows that her cover has been blown. Indeed, Peggy spends time trying to tell them, if they’ll listen, that it’s Dottie they should be concerned with, and not herself.

And, sitting in custody (but near a window) Peggy also gets to see the Leviathan hypnotist sending a message – she finds out he’s a bad guy! Too bad no one is inclined to believe her at that point. Well, and too bad that the psychiatrist did his best to become best friends with Chief Dooley, working to solve his personal problems.

But there’s not much to lose by following Peggy’s hunch, and Sousa and Thompson head over across the street to investigate. Here’s where we see Thompson being less of a “fathead” – he tells Sousa to shoot first if they find Dottie. After seeing the young Russian assassin in Europe, Thompson understands what they might be up against, and he doesn’t like it.

This also gives them a chance to talk about how they had really been growing to trust Peggy, and how they’re conflicted. They can’t deny the fact that she’s outwitted them and beaten them up, but they can still doubt her motives.

Dottie escapes, of course, when Sousa doesn’t shoot. Listen to Thompson! Don’t give her a chance! Ah, he’s not listening as I shout at the screen… 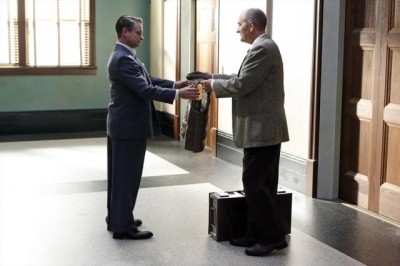 Found on The Mary Sue.

Meanwhile at headquarters, the hypnotist makes his move. He hypnotizes the chief, using him to break into the lab he couldn’t get to last episode. There, he gets the Stark invention that has been the object of the whole season – which we see at the end, is apparently a gas to make people hyper aggressive? I feel like I just read that in Kingsman…

Anyway, the hypnotist also uses the chief to lock up Peggy and Jarvis again, and to grab some other tech – mainly, a vest of Stark’s design which is self-powered, self-heating body armor. Impervious, but unstable. This goes on the chief as a distraction.

And it’s through the chief’s scenes that, for one thing, they finally made me pay attention and catch the chief’s name. That’s happened with several of the male characters, and I’ve slowly caught Sousa’s name, then Thompson’s, and now Dooley’s. Last episode we started getting to him, but this episode we really got a look into his life. Into his broken marriage, and how he has allowed the job to consume him. But really, what he would want is a second chance with his wife, his kids.

Which ends up tough with an overheating armor vest strapped on. The scientists have no ideas, Jarvis has no ideas, and even our eponymous Miss Carter doesn’t have any ideas. But at the last moment, the chief does, and he runs, jumps out the window, and just in time, as the vest explodes midair.

Dooley! NO!
Found on Between Screens.

The show has a lot of older prejudices and sexism in it, but they did a good job with Chief Dooley of bringing us back to an understanding that he was still good at his job. That he was trying to live up to the male-half of the equation, of being the good provider, and in doing so lost touch with what he was trying to provide for. But hey, he was good enough at the job that he, too, had figured out that Stark wasn’t behind all of this – hopefully everyone else picked up on that as well.

What Peggy and Jarvis spent most of the episode doing…

Being locked up. Peggy and Jarvis were pretty much just locked in a room for the episode. However, this did not stop them from having one of the funniest scenes from the entire show. They are handcuffed together, and to the table in the interrogation room. And, well… this happens.

Sadly, they close the clip before the punchline. They realize something – they are in fact still attached to the table.

Last week I had concerns about the hypnotist, about how he seemed to be a bit too powerful – in other words, he was kind of comic book. They addressed this a bit this week by going all-in with him. The opening scene is of him during the war, using his hypnotism in place of anesthetic for someone undergoing amputation. In other words, they’re trying to say, “yes, he’s just that good.” At this point, we’re definitely just supposed to accept it… but it is pretty comic book.

I also mentioned how the eventual reveal of what we assume is the Stark tech – which turned everyone against each other – reminded me of a something I just read in a comic. Oh, and the overheating armor, from the father of Iron Man? Yeah, there were some comic-book feeling elements this week, some over-the-top elements.

However, Peggy got kicked out of the SSR this episode, and we’re reminded that there are risks and dangers in this fictional world that are greater than a bit of investigating can handle. There’s ridiculous stuff out there too. And the world is going to need SHIELD to handle these threats!

No, they kept all of the technology as a new idea, not as something we’ve seen in one of the movies or in Agents of SHIELD. They could as easily of relied on something we already knew from the rest of the Cinematic Universe, but they didn’t.

I’ll let Peggy answer this one…

Next week I will have the last episode review for Agent Carter! Can’t believe the season is over so soon, but that’s what 8 episodes gets you. For more of my brand of geekery, you can check me out over on Comparative Geeks, or on Twitter @CompGeeksDavid.