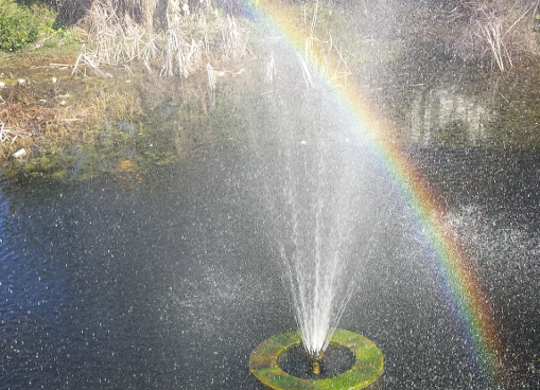 Photo by Gene’O. Linky by The Jenny Evolution.

Good day, everyone! It’s good to be back from my hiatus, and I’m hoping to keep a regular second season on my column here at Sourcerer. So, thanks for reading and please do keep coming back. This first entry is a review of a work I have touched on before–DC’s Elseworlds story Batman: In Darkest Knight by Mike W. Barr and Jerry Bingham, in which Bruce Wayne becomes a Green Lantern instead of Hal Jordan and instead of becoming Batman.

The story begins with a moment familiar to fans of Frank Miller’s Batman: Year One. Young Bruce, wounded and delirious from blood loss following his first vigilante outing, is in the process of simultaneously apologizing to and demanding a life purpose from a bust of his deceased father, Thomas Wayne. In this iteration, however, the familiar giant bat that sets Bruce on his life path as Batman is vaporized by Abin Sur‘s Green Lantern ring seeking a new wielder.

At this stage, I feel I need to step back to say a few things about this work as a comic, as a Green Lantern story, and as an entry in the Batman mythos. I’m going to be completely honest with you; this is not a particularly well done story. Though the artwork also has its weaknesses, the writing, especially, feels uninspired and contrived to force the story into being more than elegantly shaping it into something worthwhile. The best example of this is in the story’s treatment of Sinestro.

As many readers know, I am a huge fan of Sinestro. I hate to see him misused. Sinestro’s role in In Darkest Knight is a hodgepodge of altered earlier Green Lantern stories, such as his expulsion from the Corps (originally the fault of Hal Jordan). This series of convenient events continues with Sinestro coming to Earth to attempt to uncover his new arch-enemy’s greatest secrets. In furtherance of this, Sinestro hunts down Joe Chill, somehow fuses minds with him through his yellow ring, and then inexplicably begins wearing a purple suit identical to that of the Joker.

The next odd narrative choice is the establishment of a Green Lantern-themed Justice League by the Corps’s Guardians of the Universe. The Guardians approach Clark Kent, Diana of Themyscira, and Barry Allen individually in order to recruit them all into a defense force for the Earth that would allow Bruce Wayne more free time to pursue his Green Lantern duties around Sector 2814. Needless to say at this point, many of the characters’ motivations and the convenient results (such as the costumes) that follow are never satisfactorily explained.

Image of Superman, Wonder Woman, and the Flash taken from https://sourcererblog.files.wordpress.com/2015/02/7d637-reign075.jpg

There are a couple of other gripes I have with the story, and those are the sudden and useless murder of Commissioner Jim Gordon by Sinestro and the Green Lantern Batman costume. Seriously, look at it up above. He looks like a lame facsimile of Space Ghost.

Complaints aside, the story does contain some redeeming qualities. Chief among these is a line following Sinestro’s attack on Bruce that ends with Alfred’s death. When asked whether or not he would step down from his duties to take an appropriate time to mourn his loss, Bruce simply replies that his entire life is an act of mourning. If through nothing else and at no other time, the creative team truly expresses their grasp of Batman’s essential narrative here.

And that’s my Season Two premiere. I hope you all enjoyed it, or at least got a chuckle out of it. As a reading recommendation to start things off, I suggest reading this comic and drawing your own conclusions. The entire story is available on comiXology for $1.99. Let me know what you think in the comments below.

For at least the first few posts of this season, I’d like to do more reviews of comics I’m currently reading. I’ll admit I’m a bit behind the industry these days because of past financial difficulties, but I am trying to get ahead in my consumption with trade paperbacks. Future reviews will likely include the first volume of Sinestro (so I can finally finish out what I started last year) and a recently reprinted Marvel classic called Dr. Strange & Dr. Doom: Triumph & Torment. Look for more from me in coming weeks.

It’s good to be back! Now go out and support your local comic shops.