So, this is way late and I am in the mood for some Leonard Cohen. In addition to being one of the most versatile singer-songwriters I can think of, I consider him a poet of the first rank. Because he is very good at pointing out that almost everyone is playing a rigged game, through no fault of their own. He thinks that is just a part of the human condition, if I read his work correctly, and pointing it out is a worthy thing for a poet to do.

The first, and most important thing you need to know, other than my thoughts on Leonard Cohen, is that Jeremy will be back on Wednesday. Batman is a bit of a culture hero around this place, and the blog you see before you today would not exist in its current form if not for the fact that Jeremy delivered the Batman every week for almost seven months last year, which gave me the breathing room I needed to just love blogging and do all the meta-stuff. So do stop by and read Jeremy.

We will have our other features, as well, and OMG, the Walking Dead is back and so is LUTHER!

Our friend Nerd in the Brain is on a quest to spread kindness and happiness across the blogosphere, and she now has a hashtag and some badges to go along with her #ThreeThingsThursday feature.  Check it out! She’s good with you stealing the idea, and I will tell you. This feature includes many of the elements that have allowed the #WeekendCoffeeShare to become a thing. If you are in the market for a Thursday feature, or just enjoy spreading some positive vibes, this is for you.

I barely tweeted this weekend, and almost did not even post. Because I am helping out with a super-secret project which involves offering people an e-book that I am included in for absolutely free (it will take a while, but it will happen!) Also, some crazy-good feminism happened on Sabina’s Friday thread and that required a lot of my attention. You might enjoy scanning that thread. I recommend it.

Have a fabulous week and a world domination joke! 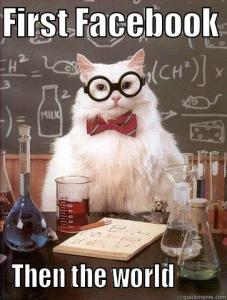