Okay, so I might have a Pharrell Williams soundtrack playing in my head (you know, because I’m happy), but I promise to go easy on my enthusiasm at Ollie’s return. Unless you want to, I don’t know… clap along perhaps!

After the revelation last week, and the police uprooting themselves from the Glades, it wasn’t a surprise to discover that Brick had made himself completely at home. His minions were out creating havoc while he lorded it up, in the abandoned precinct no less. I’ve got to agree with Felicity about the irony of that one, though not as eloquently I will admit. The team were taking care of business, and though out of their depth, it was great to see them working together.

Malcolm Merlyn played a pivotal role in this episode, which meant we saw glimpses of the Dark Archer in action. There was also a nice reference to Merlyn the Magician. With the assistance of flashbacks (and a rather interesting wig choice) we were privy to the events which turned a good father into a man who threw his daughter under the bus, killed hundreds of people, and failed his son – on so many levels.

The journey into Malcolm’s past began on the evening of his wife’s death. It was actually a pretty powerful set-up – revealing a young Tommy and the bond between father and son. It ended with Malcolm opening the door to two solemn-faced policemen. Later we saw Malcolm at Rebecca’s grave, which gave us a feeling of his desperation, especially when he was given a name with which to focus his rage. For me though, the scene of his first kill gave us true insight into his character. Yes, he wanted revenge, was consumed by anger at the injustice of losing his wife, but he didn’t have to shoot the man in the back.

There was a fun glimpse into his training sessions with Thea, a chance to show off his sword fighting skills and drive the point home that he is a killer. Malcolm clearly has ulterior motives for staying close to the action, not least because he’s spying on Team Arrow. This naturally led to Malcolm discovering he killed the wrong man (since he was keeping tabs on the investigation).

It turns out, Danny Brickwell took Rebecca’s life. Ballistics from the gun which killed Malcolm’s wife were tracked back to Danny, a fact which gave the weapon a new significance (the thing almost has a life of its own). The news sent Malcolm into revenge mode, putting him in the right place at the right time, because Black Canary and Arsenal were in a spot of trouble. Malcolm took advantage by trying to convince the team to form an alliance – the common goal to rid the Glades of Danny Brickwell for good. Thankfully, Felicity was the voice of reason on that ludicrous scheme.

At one point I thought they might actually consider it. Roy was certainly on board, influenced by Thea’s speech about her father trying to atone for his sins. The fact he saved her life apparently cancels out everything else he’s done, including the plan to level the Glades. What will she do, I wonder, when she discovers the real reason Malcolm trained her?

Malcolm’s backstory had another purpose, a way to merge his path with Ollie’s. During the scenes with Tatsu, when Ollie began his journey back home, the seeds were planted in terms of a rematch with the Demon Head. Tatsu warned him he would need to make the ultimate sacrifice. It isn’t hard to guess what, or who, the sacrifice will be. For a moment I hoped Ollie might turn to Maseo for training, given the wisdom that ‘only the student has hope of defeating the master’. It appears that role will fall to Malcolm, though I’m hoping for a different outcome. I find it hard to imagine an alliance between the two archers.

Captain Lance had a difficult time in this episode – he’s a man who cares a great deal about the city and will do anything in his power to protect it. His scene with Arsenal was amusing, the fact he knew exactly who was hiding behind the mask. Clearly he has a blind spot when it comes to Laurel and Sara but, as I suspected, the reveal is on its way. It took an appearance from Sin (who joined the uprising), to point out the Canary isn’t who she appears to be. But in his heart, I think he’s known all along.

Though the team were clearly missing Ollie, they didn’t let the small problem of being outnumbered slow them down. On the contrary, they rallied and, for the final showdown, they even brought along a few friends! Those who call the Glades their home were more than willing to make a stand and fight back.

The scenes during the uprising were just fantastic – dark with the kind of imagery perfect for a comic book. From the moment Black Canary and Arsenal stepped out to challenge Brick, I knew we were in for something special. I even stopped wondering what was taking Ollie so long to get back! Roy’s ‘You have failed this city’ was a really great effort, but it was trumped by Danny’s dig about his two favourite trick-or-treaters – I had to smile at all the talk about masks in this episode. But then, when Brick brought out his goons, Diggle and the gang brought out their ace in the hole. The battle was thrilling, and included an appearance by Ted Grant (Laurel’s training partner) who, despite the rather suspect costume, got in a few good licks before Brick turned the tables. Laurel came to his aid, genuinely concerned since Danny left him in pretty bad shape, and then she became distracted by a familiar arrow (so fickle).

Fine, I’ll admit it, I was distracted too! I think I might have whooped a little when Ollie showed up in the alley. The fact he managed to prevent Malcolm from killing Brick was a surprise, but then there has to be an element of give and take and Malcolm is a smart man. He always weighs his options. 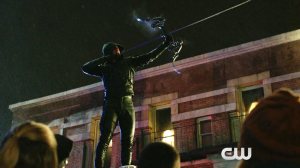 Brick’s defeat, and victory for the Glades, ended with a speech by the man himself (that’s The Hood in case you were wondering!) It was beautifully timed – a testament to the strength of the city. Ollie’s parting words ‘You did not fail this city and I promise I will not fail you by leaving it again’ was punctuated by a rather cool exit.

I had hoped for a touching, if somewhat emotional reunion. But Ollie was true to character, making a quip to Thea about being in prison (and up to his old tricks), and telling Felicity he was fine, like he hadn’t just come back from the dead. It played out exactly right, even Felicity’s reaction to his arrangement with Malcolm. She spoke of what Merlyn did to the women Ollie loved, and her parting shot ‘I don’t want to be a woman that you love’ had a definite sting to it. But she has a point, she is the voice of reason, and though fans were probably hoping for something more, they might have to wait a little longer yet.

I enjoyed the episode, liked having the chance to see the team develop in Ollie’s absence, but I’m so glad he returned this week. I’m going to turn up the sound track now, and bask in the fact Ollie is back where he belongs!

How about you? Did you enjoy the episode? What did you think to Vinnie’s interpretation of Danny Brickwell? I’d love to hear your thoughts.