Reblogged for folks who live in the Pacific, because my mobile tells me it is a good time to post for Sydney! Major announcement about the comics schedule coming tomorrow.

I’ll make this quick. I’ve signed on to a project to get 1,000 bloggers to write about compassion and publish the pieces all on the same day. You are invited. The posting date has not been set and I have no idea how long it will take to find the 1K bloggers.

I already have my post idea. Once the date is set, I will make a decision about whether I can deliver or not. The writing schedule is TIGHT right now. Even if I can’t join in with a post, I’m giving this as much social media support as I can manage. There will be a hashtag, I am sure. And you know how much I love some hashtags. 😀

This one’s been sitting so long I don’t even remember where I took it.

Hello, and welcome to the start of my recap series for Agent Carter, season one! While I often write singular reviews of things (like I have for Agent Carter) over on Comparative Geeks, I’ve never done an episode-by-episode review before. I’m usually more one for massive posts dealing in speculation, opinion, and reactions.

But here I am, introducing this series. I didn’t watch these episodes with an intent to do a recap, I watched them with some very specific questions in mind. Then they basically went in a completely different direction and I followed right along with them. 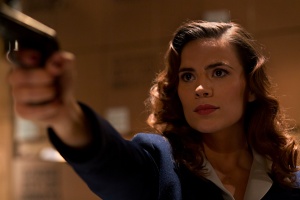 From the Agent Carter one-shot on the Iron Man 3 disc.
Found on http://marvel-movies.wikia.com/wiki/Marvel_One-Shot:_Agent_Carter

I was also amazed to find that this was, in fact, two episodes, and not just one long one. It transitioned between the two very well, without a big cliffhanger in the middle or even really much of a pause. Although looking back at it… maybe more of a break than I noticed!

The show is great, and I am really excited to bring it to you on a weekly basis. The plan is for the posts about the last episodes on Tuesdays, before the next episode airs. The other thing I plan to do is ask a few ongoing questions of the series, about whether it stands on its own, and whether it matters that it is a female-led hero show. So let me quickly recap the two episodes for you, and then on to the questions!

Now is Not the End

This is a cloak-and-dagger, undercover-agent spy episode. Howard Stark has been branded a traitor, his most powerful technology showing up in the hands of the enemies of the United States. Stark has also disappeared, which looks highly suspicious.

Despite all of this, Agent Peggy Carter, badass-treated-as-a-secretary, doesn’t believe at all that Stark is a traitor, and he apparently expects this – showing up and recruiting her to clear his name. This involves her needing to go behind the back of her fellow SSR agents, but she seems to pull this off no problem, since she is not only a better spy than they are, but they just don’t expect it of her at all. 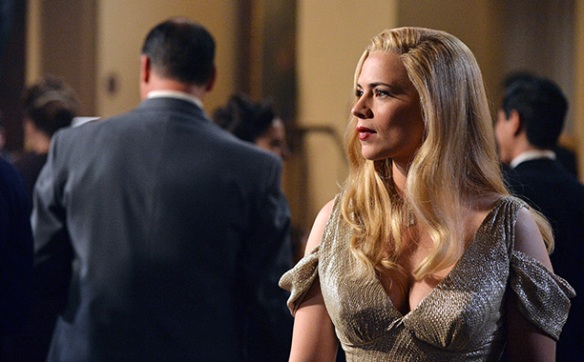 It also helps that the one weakness that the fence selling Stark’s tech has is for blondes. Agent Carter dresses for the occasion, sneaking in to a party and getting a private audience with the fence. Her knockout lipstick works a little too well – he kisses her before she’s done interrogating him. But his safe is there in his office, and she breaks in – to find that they haven’t been selling Stark’s blueprints, but have actually been building the new technology and selling that. So there’s an implosion grenade.

Carter, with the somewhat unwanted help of Stark’s butler, Jarvis, and the hapless help of the male SSR agents, follows the trail of the implosion grenade and its manufacture to Roxxon Oil. She finds it being produced – and a milk truck full of the things. A fight, a getaway, and a mad dash to escape – as an implosion goes off and destroys Roxxon.

So now, the hunt is on: there’s a truck full of unbelievably dangerous weapons out there, and a creepy guy whose voicebox has been cut out claiming to work for a mysterious Leviathan. Hydra, Mark-II? That remains to be seen!

Agent Carter now goes undercover as an inspector, using a very different skillset and attitude. She finds there’s a truck missing, and the man who drives it uses it for his commute – and is out today. Thus begins a hunt, and chase, that ends up with a car chase with a truck full of implosives. Implosives? I’m going with it.

This episode did a lot to further the relationship of Peggy Carter and Jarvis, had the SSR getting a bit closer to finding out who it is that seems to be a step ahead of them – they have pictures of a blond, and now a female footprint. Oh, and a license plate from the Roxxon implosion – from a car belonging to Howard Stark. So it’s going to look even more like Stark destroyed Roxxon, a rival. That’s not going to help things.

Since the two episodes blended together so much, I’m not sure what else stands out particularly about this episode. Their initial leads to Leviathan have both died, and the SSR is getting close to Peggy… so at this point, it’s Leviathan’s move!

I think this first question is important, because I’ve seen a lot of discussion around people talking about watching, or not watching, super-hero television. For instance, you’ve got someone like me, who would watch this just because it has “Marvel” stamped on it – but having been roped in, I’m sticking around. But were these episodes particularly “comic book” feeling? No. Okay, there’s improbable tech, with the implosion grenades, and there’s spy tech, but I could just as easily be watching a spy story as a comic book one. So is it pulp fiction? Genre fiction? Sure, but it’s meant to be. Do I feel like I’m missing some vital detail by not having read more comics? No, although I’ve never heard of Leviathan before and it sounds like they are from the comics, so we’ll see!

This one is important too. Can you just watch Agent Carter, or do you need to have watched Agents of SHIELD and all the Marvel movies? My answer here is… kind of. They give you flashes of Captain America: The First Avenger to help give you the context for where she starts the show, emotionally. But seeing that movie, in particular, would help a lot. Luckily, by not being tied up with the creation of SHIELD, or fighting Hydra, they have avoided a need to be keyed in to much else from the rest of the Marvel Cinematic Universe. We’ll see if that continues, or if they’ll start branching into the other stories more!

One other thing: they made it so that the details of what Captain America was and did don’t matter as much – instead, they gave us the radio drama, playing up Cap and his fight against the Nazis. Which they then used to offset Agent Carter kicking butt and taking names, just like Cap!

And here’s my last question I want to ask every week, because a lot of the excitement factor for this show is that it is a comic-related property with a female lead. She’s smart, she’s strong, she’s independent. I think they said it perfectly in the review on SourceFed Nerd: it doesn’t matter to her that she’s a woman, but it matters to the world around her that she is. I’m paraphrasing, but it’s a good point. She is pretty much over sexism and is off doing what needs to be done, brilliantly. The rest of the world around her is steeped in sexism. It’s oppressive and inescapable. And it means it absolutely mattered that she was a woman from a story standpoint, that the sexism and the historical moment they are exploring and all the rest of it wouldn’t matter, or resonate, or even need to be there. We wouldn’t have needed the show if she weren’t a woman.