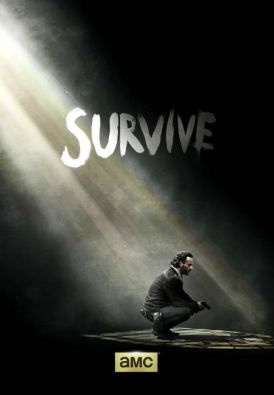 Man, oh man.  This season has been really wildly uneven so far to me.  There have been some really good episodes (“No Sanctuary,” “Self-Help“) and some bad ones (“Four Walls and a Roof”) but this was the first one that was just forgettable.  I normally write these the Friday night before publication, and a lot of the time I watch the show again on my laptop while I’m writing, right?

This week?  I forgot.  Literally.  I forgot we even had a Walking Dead last week, because this was such a filler episode.  It’s got good bits to it, but even a lot of the good bits are unfortunate because they make me wonder about things that the episode isn’t really interested in spotlighting.  This’ll probably be one of my shorter pieces again, just because I don’t feel like this episode has much worth saying about it.  But without further ado:

PREVIOUSLY ON “THE WALKING DEAD”: Two episodes without a single second of the show’s main character, which is about to become three here; Eugene’s horrible and completely obvious secret is exposed to everyone, and, well, the good news is that Abraham isn’t as dumb as we thought but the bad news is he’s apparently an abusive husband.  Eugene gets beat up so bad he turns into an inanimate object.  Rosita’s too cute for the apocalypse.

Here’s the tl;dr version of the recap:  Daryl and Carol wander around Atlanta looking for Beth until Carol gets hit by a car.  Daryl takes Noah back to the church so that he can come back with everybody.

That’s really all the information you need.  There’s some good character bits sprinkled in here and there, and I’ll talk about some of those, but if you were just interested in what you need to watch tonight?  Carol wasn’t faking being unconscious.  She gets hit by a car driven by the hospital folks:

Left unsaid is whether they hit her on purpose or not; based on the shot I’m willing to believe it was an accident, as I suspect a year and a half or so into the zombie apocalypse you probably stop looking for pedestrians and start getting a lot more willing to just run down folks who are in your way.

The person with Daryl when he came out of the trees at the end of “Four Walls and a Roof” was Noah, or at least ought to be Noah unless Daryl manages to lose him and find somebody else in the trip back.  Noah has apparently been wandering Atlanta and staying alive and somehow manages to get the drop on D&C when they stupidly go through a locked and chained door backwards.  It’s a really dumb moment.  Then he doesn’t make sure to take all their weapons, and Daryl prevents Carol from shooting him in the back as he well deserves.  This guy should not be able to take anything from Daryl and Carol: 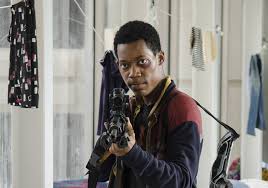 Not too long after their guns get stolen, they’re walking across a bridge to investigate a white van that has the same crosses on the back as the car they chased back to Atlanta and the car that took Beth.  They get trapped in the van by a herd of zombies; the van (naturally) is hanging precariously off the edge of the bridge.  And the scene is almost tense and interesting but ends up stupid.  The zombies manage to push the van off the edge.  It looks like this: 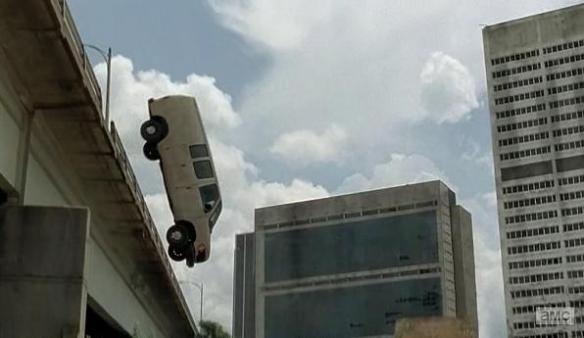 Now, you can’t see the ground in this shot, but you know how bridges work and you know how physics works, right?  So it might be surprising for you to learn that the van lands on all four wheels in the next shot.  Look, show, we know you’re not gonna kill two of your program’s most beloved characters in a bloody car crash.  We know they’re gonna come through either unscathed or lightly injured; Carol manages to injure her shoulder.  Just have the thing land on its top.  You still get ridiculous injury physics but you don’t have the car teleport for the second episode in a row.

The scene is slightly redeemed by the rain of zombies moments later, as the things follow the van off the edge of the bridge, hit the van, and explode.  Sadly, I can’t find an image of the shot.

There are a few good moments: 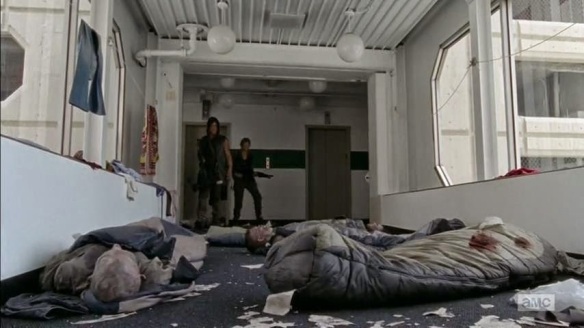 Notice the two bullet holes in the bag on the right?  These people were all executed in their sleep.  There are a few other places in the episode where the camera lingers on bullet holes in places you wouldn’t expect bullet holes to be.  There are buildings that are burned out that you wouldn’t expect to be, and we’ve all heard the references to Atlanta being bombed in previous episodes.  It gets me wondering if we’re ever going to see what happened there, and it gets me thinking about Frank Darabont’s original plan for the Season Two opener, which would have left the group behind for a bit in favor of following the soldier whose body Rick finds when he’s hiding in the tank in Season One.

(Who else clicked that link and went “Whoa, AICN’s still around?”)

So, yeah.  Eventually, and improbably, they find Noah again, and this time it’s Carol who insists on saving him when Daryl basically leaves him for dead under a bookshelf.  He says he’ll show them where the hospital is, and Carol gets hit by the car, and Noah convinces Daryl that coming back with more firepower is smarter than going in guns blazing.  So they steal another car and off they go.  Two episodes left this half-season, and from what I hear, the midseason finale’s going to be a rough one.  (Mild spoilers behind that link.)