This week on American Horror Story Freak Show the plot felt a bit muddled, but perhaps that was because lots of things happened in preparation for the end of the season story arc. The Tattler sisters returned to the freak show, Dell committed attempted murder and then committed murder, and Penny’s father Lost His Shit. (Warning: Spoilers below!)

The Tattler Sisters, Jimmy, and Elsa

At the beginning of the episode, Jimmy is at the Mott household, trying to get Dot and Bette to go home to the freak show with him. Dot knows that Dandy isn’t what he seems, is probably incredibly dangerous, but Bette, who is absolutely in love, doesn’t want to go back to the show. She does, though.

And somehow, in the middle of all of this, Jimmy decides to practice singing “Come as You Are.” The musical number seemed an odd fit here, not the right song or something. But anyhow, Jimmy

is really mad at Elsa, so he’s practicing to her. He’s practicing grunge to her. Of course she hates it, and Jimmy is ready to reveal to the freaks that orchestrated the disappearance of Dot and Bette. But Dot and Bette lie, saying that Elsa helped them experience a life of luxury. In exchange, they’re plotting all sorts of prices–a new act, caviar in bed, half the box office proceeds, etc.

Elsa seems willing to grant some of their wishes. In one of the show’s more bizarre-but-fun scenes, Bette colors her hair blonde, wears an abundance of makeup, and laughs that she and Dot will be “the perfect before and after.” Dot’s the before, of course. While she’s prattling, Elsa and Dot are having a conversation through passed notes–one that we hear through the mouths of Floating Head Dot and Floating Head Elsa. In black and white. It’s weird, but it works. Dot, of course, wants Elsa to find the doctor who performed the surgery on the twins, and she wants to be ride of Bette.

And across town, Dell is perplexed, by a whole other issue. He can’t understand why he hasn’t seen his lover around lately, and he returns to the bar to search for him. Stanley notes his appearance at such a place, though, and begins to use Dell’s sexuality as blackmail. The price of silence is for Dell to help Stanley turn the freak show into an exhibit for the museum.

Somehow, Dell decides that the proper first victim for him is Amazon Eve. Even for a strong man, 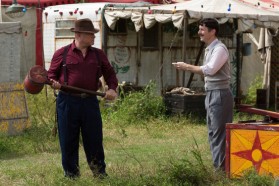 this seems like a stupid move. Eve is tall, strong, and heavy—difficult to kill and to transport. But he makes the stupid decision, trying to chloroform her in her sleep. Consequently, Dell gets his ass kicked. “Who’s the strongman now” Eve asks.

Dell goes to another bar to drink away his defeat. Jimmy interrupts him, has a drink. Dell seems about to kill Jimmy, but changes his mind, acknowledges him as a son. Somehow the two are friends, and this seems like a Bad Thing.

Penny thought it would be a good idea to go home. I suppose she needed clothes or something? But her father, of course, is waiting for her. And he has a surprise. Honestly, it’s one of the most bizarre surprises that AHS has thrown at its fans so far, and it’s Morris the Tattoo Artist. Morris gets to work tattooing Penny’s face and forking her tongue. Yep—Daddy hired a tattoo artist and body modifier to screw up his little girl’s face so that she would no longer be recognizable as his daughter. Damn.

When Penny returns to the freak show, Paul is furious. It’s clear that he also feels responsible for what has happened. I can only hope that whatever more drama unfolds there, it will include Something Else About Morris.

This week saw the death of Ma Petite at the hands of Dell. The body count has been relatively small on AHSFS so far, and watching Dell crush Ma Petite against him was a heart-in-throat moment. There was little doubt, after seeing Dell attack Amazon Eve, that what we were

seeing was happening, was not a Pink Cupcakes moment of imagination. It’s also a good indication of Dell’s character that when he couldn’t take on the largest, strongest person in the camp, he chose the smallest.

And then, seeing Ma Petite’s small body suspended, preserved as an exhibit at the museum was shocking–she makes the third (fourth?) character that we’ve seen in the exhibit so far, though the first that we’ve seen die. My hunch is that we’ve seen the first of what will be many deaths resulting in a full exhibit by the show’s end.

It looks as though, when the show (and I) return week-after-next, we’ll see more of the situation between Penny and Paul unfold as well as some repercussions of actions taken by some of the characters.

Episode Grade: C+. This was one of the few episodes I haven’t watched closely because, while there was a lot going on, a few scenes dragged, and the plot seemed to fold into itself at times. An average episode, but we’ve seen way better this season.

I am feeling the need to do a substanial written post, but also to lighten it up a bit around here. Since Diana did an awesome Thursday Thirteen of fictional places she’d like to visit last week, let me just get in on that fun. I’ve read her list, but I’m pretending I didn’t long enough to make one of my own. There will be some overlap.

1. Tolkien’s Middle Earth. Specifically, I would like to tour cities and strongholds of the First Age. Nargothrond. Gondolin. Menegroth. Nogrod and Belegost. These are fictional place names that give me the shivers and make my imagination run entirely amok. And there are more of them.

3. The Dreaming, the realm of Morpheus, formally known as Dream of the Endless, from Gaiman’s Sandman series. You knew this had to be here, right? The Library of Dream is a point of particular interest, because it contains every book that was never written (a whole section of novels the authors finished only in their dreams, for instance).

4. Carroll’s Wonderland. I know the story, but haven’t actually read the book. This one is too good to pass up on the strength of adaptations alone, though. If I had 13 wishes and could only use them to visit fictional places, I’d have to use one of them to have a chat with a certain caterpillar.

5. Krynn, the setting of the Dragonlance series. The halflings of that world, called Kender, are too interesting to not meet.

6. Amber and the Courts of Chaos from Zelazny’s two Chronicles of Amber series. I could be cheating here because that’s two places. Or maybe not. Maybe they are more like sides of a coin, since they are the only two really real worlds, and all other realities are reflections of them.

9. Jasper Fforde’s BookWorld. This is a meta-world (for lack of a better term) in which characters and places from books are real, and the putting-together of literature is an industry. There are literary police, of course. And a detective from the “real” world, a bemusing dystopia in which time travel and cloning are well developed, and cheese is so expensive people smuggle it.

10. The Great City of Ankh-Morpork from Terry Pratchett’s Discworld.

11. Kashyyyk, also known as Wookie Planet C. And Bespin, the Cloud City from The Empire Strikes Back (still my all-time favorite). I’m cheating again, but I figure if I can tour the cities of Middle Earth, I can take a hyperspace jaunt around the Star Wars galaxy. Oh. Coruscant, too. I’d have to see Coruscant.

12. The planets Vulcan and Romulus with a layover at Deep Space Nine. I love Star Trek and Star Wars  differently, but equally. They each get three places on the list.

13. Arrakis from Dune. This one wins out over both Westeros and Narnia because “He who controls the spice controls the universe,” and we all know what a megalomaniac I am.