Comics. I love ’em, and they’re turning into movies left and right. There are continually ups and downs, good ones and bad ones. Movies and comics both, I suppose! There seems to be a formula to adapting a comic to a movie, as well. Not that they are all alike, or formulaic – but the adaptation happens in pretty similar ways.

I have been doing a series on Comparative Geeks called LitFlix – where we read the source material first, and then see the movie. My wife (@CompGeeksHolly) has been covering the books, and I have been covering the comics. So I guess in a way, these are some of my observations from doing that.

I suppose in particular I’m going to focus on the superhero films. I’ll try not to pick on any particular films or franchises, because I know there are people who like all of these different characters, and the different films as well. There are also critical eyes which would find problems with all of them, and fans who might find no problems with them at all. And what I have to describe aren’t necessarily problems – but patterns. So I hope you like comics, because it’s comics time!

Start at the Beginning

Yes, ha ha, start at the beginning. One of those basic storytelling ideas (and the definition of “beginning”…). However, it means something different when it comes to comics movies: start with the origin story.

I used this on http://comparativegeeks.wordpress.com/2014/06/01/amazing-spider-man-2-a-review-a-litflix/

Let’s look at a couple of reboots. Say, The Amazing Spider-Man. One common complaint was that we were going back to a character we know, pretty well and pretty recently, from other movies. And not continuing the continuity, but instead a new one. Which, it seems obviously, had to start back at the origin story. We couldn’t just have a Spider-Man movie where he’s going around being Spider-Man. For whatever reason, we have to tell the origin story first.

Or how about the Dark Knight movies? As much or more than Spider-Man, Batman is a known character with a known life, story, and origin. And a series of movies – different creative teams though they might have been – had ended not that long before Batman Begins. But again, back to the origin story.

It might be that it shows you are a different story. Clearly, when you repeat, re-do, and change a known event (like the origin), you are showing that you are telling a different story. And sometimes, you want and need to create that distance – I can understand them wanting to distance themselves from the previous Fantastic Four films, so I’m sure the new one will be an origin film.

So many more examples I could give! The origin stories keep coming up. But maybe the example to turn to is one that shows that going back to the origin stories is a really good idea. Superman Returns. They tried the idea of making a movie, years later, still in the same continuity as the previous films – like a Bond film might (except even Bond has dipped into origin-story territory of late!). For a variety of reasons, this film was not considered all that good, and ended up being the end of that continuity.

And so they made Man of Steel: new continuity, new tone and look and feel. Going back to the origin shows us it is new and different, and we accept its difference as the audience.

So while origin stories are an incredibly large percentage of superhero movies, not so with the comics themselves. A lot of big anniversaries have been hitting lately: 50 years of X-Men, Avengers, Fantastic Four… 75 years of Batman… and largely, these comics are still working in the same universe continuity as when they started.

Sure, there was an origin story at the beginning, but since then, they have to tell a different story. Often, you end up with short-stories or alternate realities, where they can re-tell or re-explore these things – sometimes going back to the origin in these. Like one short story I just read, Batman: Year One, which steps back to the very beginning of Batman. Or the one I read before Man of Steel, called Superman: Birthright.

However, I think the best example is Iron Man. This film, though I didn’t know it at the time, was at least in part based on the comic Iron Man: Extremis. In this comic, Tony Stark is remembering back to his beginning, remembering designing his first suit, in a cave, and just really a lot like the first Iron Man film. But then, this shows my second point about picking the right origin story: pick one that is a gift that keeps giving.

I used this on http://comparativegeeks.wordpress.com/2013/05/11/iron-man-3-and-iron-man-extremis-a-litflix/

Because Extremis was not just the idea behind the first Iron Man: it was also the baseline plot to Iron Man 3. Far more obviously. But still, part of those comics, as I found and was amazed, was what they tapped as the origin story. However, you can’t really start with Extremis as a plot, so they ran the origin – and then returned to it later.

I’ve noticed this effect in some of my other LitFlix reading as well, such as for Thor: The Dark World. This is based in part on the comics introducing Malekith as a villain. Except, the mythical object that Malekith was involved with wasn’t the Aether from the movie: it was the Cask of Ancient Winters, from the first Thor.

Pick a good origin story comic, and milk it. Which leads into my next point.

Pick a Writer and Stick With Them

Decades of comics and continuity. So you might expect that in making a movie, you’re able to dip into all of it, able to pick and take whatever you want. However, over the decades of their existence, there have been countless creators involved in their stories, inconsistencies and changes and resurrections and all sorts of comics antics.

For making a movie, it’s actually probably a really good idea that they seem to stick with one creator in general for their movies. Picking one story arc, and fleshing it out over several movies, is one representation of that. It helps you make several consistent stories across multiple movies, and making multiple movies seems to always be a goal with a comics-based movie.

I used this on http://comparativegeeks.wordpress.com/2014/05/14/captain-america-the-winter-soldier-a-litflix/

You see this with so many series, and it’s a safe bet for figuring out the future movies. For instance, following Captain America: The Winter Soldier, it’s safe to bet that they are going to lead into stories from Marvel’s Civil War storyline, or else continuing on past that into the Death of Captain America. All the characters are there and set up to tell that story – all from the pages of Ed Brubaker’s Captain America run. 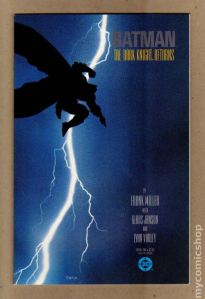 Gene’O used this on http://comparativegeeks.wordpress.com/2014/08/08/batman-retired-are-you-kidding-me-millers-the-dark-knight-returns-part-1-of-2/

Or there’s tapping the various Frank Miller Dark Knight comics and other Batman titles (like Year One), to bring about Christopher Nolan’s trilogy. Sure, there’s 75 years of Batman to pull from – but to tell a succinct story in a trilogy of movies, you can’t just pull from everything, you need a specific vision.

Next week, I’ll look at a few other rules, once you’re past the origin story. And after that, a case study that exhibits all of the traits! See you next week, or over on my other blog (linked heavily above), Comparative Geeks!