Hey, hey…At this point, we’re only 2 hours from the series finale of HBO’s True Blood. My apologies for last week, which I missed reviewing due to a busy schedule and a Spanish minisession class. This week, I’ll combine the reviews, so you’ll get a two-fer.

“May Be the Last Time” gives (some) fans what they’ve been wanting desperately since the breakup of Sookie and Bill—the couple gets back together. Unfortunately, this is an aim that the series has made clear since at least the second episode of the season with clumsy stolen moments at the expense of Sookie’s relationship with the now-deceased Alcide. Speaking of which, isn’t it odd to jump from the bed one shared with a dead lover into a now-dying lover’s bed? Grief makes people do strange things, I suppose . . . 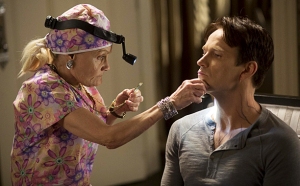 Like summon Dr. Ludwig, a dwarf healer who runs from nothing—except the name of Sookie’s fairy grandfather, Niall. Ludwig ultimately proves unhelpful, and so does Niall, when Sookie calls upon him to use magic to heal Bill. There is no magic for Bill. But Sookie still stubbornly refuses to give up on finding a cure for the Hep V that has spun out of control since he was infected by Sookie’s Hep V positive blood.

Meanwhile, in Dallas, Gus, Pam, and Eric try to coax Amber to reveal the whereabouts of her sister, who we now know is the cure to Hep V. Eric spins out of control and kills Amber in a fit of rage, But Gus and the Yakomono corporation sit him down for serious discussion. They can locate Sarah—and when they do, they want to synthesize her blood and sell it as a cure. Eric, they wish to be the face of their cure. But he cannot kill Sarah, at least for the time being. He reluctantly agrees.

And back in Bon Temps, Arlene has been having a serious heart-to-heart with Sam. Nicole has gone to her mothers’ home, and Arlene wonders if Sam can actually stay in Bon Temps without Nicole and the baby. I think the show is working toward Sam leaving Bon Temps, and it’s unfortunate that at this point, he should’ve already gone. Sam’s character is in stasis, even more so this season than perhaps anyone else, and he only appears in a will-he-or-won’t-he scenario at this point. Anyway Sam leaves Bellefleur’s, and Arlene is left there alone. She has a dream about Keith, the vampire who saved her when she was almost drained of blood in Fangtasia and who hit on her at the party after Alcide’s death. He shows up in Bellefleur’s pretty quickly thereafter. And with grace and humor, the show handles one of the more difficult parts of this epidemic—Arlene is Hep V positive. She tells Keith, who just smiles and says “well, then we’ll dance.” It was a nice, nuanced moment for both characters.

Lafayette and Lettie May are digging in the ground of their old home. They startle a little girl, who goes to get her parents, but we don’t see much more of what happens. And Bill is still having flashbacks, this time of learning that his father’s illness means that he needs to marry to ensure his mother will be cared for and of meeting Caroline, his wife via the arrange marriage. Bill’s flashbacks are interesting, sure, but I think they’d have had more impact earlier in the series. At this point, it’s just too little too late to tell us more about Caroline.

Jason meets Hoyt to discuss arrangements for Maxine Fortenberry’s viewing and funeral, and the meeting is painful to watch. Hoyt has a beautiful, blonde girlfriend named Bridgette who catches Jason’s eye despite his constant attempts to ignore her presence (this is a little annoying). Hoyt is blissfully unaware of his history with Jason, but of course Jason still remembers everything that caused Hoyt to ask Jessica to wipe his memory and send him on his way. The scenes between Hoyt, Jason, and Bridgette are both humorous and painful. For instance, Jason cannot bear to leave Hoyt after he sees Maxine’s body, even if it is odd that a deputy would return home with a person after they’ve seen the body of their deceased loved one. He doesn’t want to hurt Hoyt anymore, so he lies about Maxine’s death, saying both that she was not a part of the mob and that her killer was apprehended.

Across Bon Temps, Andy and Holly still search for Wade and Adilyn. The kids are in Violet’s home, though, and they’re about to get a rude awakening. Violet supplies them with a veritable room of sex toys, seeming to leave the two alone, but it isn’t long before she returns and ties them up. Jessica, of course, feels that Adilyn is in danger and bolts to the rescue. And now she’s caught.

And Sarah has found the abandoned Fellowship of the Sun. She tries to hide there, but she’s found, haunted by her ex-lovers: Jason, Steve Newlin, and Guru Dutta. The Christian-versus-Buddhism arguments are pretty entertaining, as is Jason’s now-and-then “you’re gonna die tonight” intervention. And then the Yakuza/Yakomono show up.

…Which is essentially where we begin “Almost Home,” an episode dedicated to wrapping up some story threads here at the end.

Eric and the Yakomono draw Sarah out of her hiding place. For a moment, it looks as though Eric will kill Sarah despite the deal, despite Pam threatening to kill herself, but he drinks enough from her to be cured before throwing her at the feet of the corporation. Later, we find out that the corporation wants to engineer New Blood as less than a cure—as something less than perfect so that those infected keep buying. Eradication of the disease has never been their goal. Eric and Pam are surprisingly ok with this idea, perhaps because they’re stuck with few other options.

In Bon Temps, Lafayette and Lettie May are still at their old home, digging holes in the yard. For some reason, rather than calling the police, the family has called the Reverend, who decides to join in the V trip by taking some of James’s blood. The small family then stands by while Lafayette, Lettie May, and the Reverend are treated to a vision of a young Tara’s birthday party ruined by a drunk, abusive father. This is all a little strange, not least because the entire purpose of this vision was to lead Lettie May to a buried gun that Tara couldn’t bring herself to use on her father. The two apologize to each other (again). Now I was never really in the camp of Tara-haters, but for her season-long haunting to end this way is irritating. It’s re-hashed ground. Hopefully this time Tara is really at rest, is really gone. 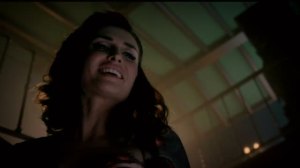 Bridgette and Hoyt, meanwhile, are arguing over Bridgette’s ill-timed admission that she’d like to have children. (This is beginning to make me think that we’re headed for a Jason/Jessica/Hoyt/Bridgette swap. Oh please, no.) Jason is with them, still, and when he receives pictures of Jessica, tied up and being tortured by Violet, he races out the door. Bridgette, though, insists upon coming along, refusing to stay in the house with Hoyt after their argument. At least Jason is smart enough to leave her in the car with a gun when he arrives at Violet’s house. Inside, he finds Adilyn, Wade, and Jessica tied up and Violet ready to torture them. And, predictably, he gets himself captured, too. But just when Violet has gone full-monologue, Hoyt shows up and shoots her in the back, bringing a quick, unexpected end to the story-line. 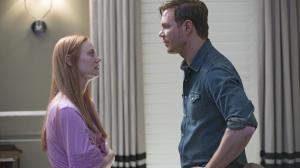 Jessica is enamored by Hoyt, and he seems enamored of her, too. But that brings back all sorts of questions and problems. After all, this is not an Eternal Sunshine of the Spotless Mind-esque situation in which both parties are unaware of what has previously happened. Jessica has full knowledge of what happened before, and even if it is cute to see the chemistry between the two actors, the creep-factor of her knowing what Hoyt doesn’t know about their prior relationship is pretty high.

Eric shows up at Bill’s house, cured. Sookie is ecstatic, but Eric doesn’t truly understand why until she reveals that Bill is sick, that he contracted Hep V from her and that her fairy blood is speeding up the illness. Eric is surprisingly affected by the news and promises to help. And a very sick Bill has a dream of Sookie. She is sitting in a rocking chair with a baby. But when we get closer, we realize that the baby is actually a dark creature, something like a grim reaper or a demon.

But of course, Sookie cannot wait for Eric’s help. She drives to Fangtasia alone, barely makes it past the guards, and is “glamoured” by Eric before she leaves. Of course, though, she still cannot wait for Eric, and she finds that Sarah Newlin is in the basement, that she is the cure. She then manages to haul Bill and Jessica to the basement of Fangtasia with her. Bill won’t drink, though, and at the end of this episode we’re left wondering whether Bill is going to embrace his death in a way that only Godric has embraced his death on this show.

It looks like next week we’ll get some more answers as well as work up to the end-of-the-end.

One of the first photos I took with the camera on my new phone.  As you can see from the color and texture here, the phone camera produces higher-quality images than the one I’ve been using. It’s more difficult to line up shots and get good ones with the phone, though, so I’ll probably use a combination of the two until I can pick up a better camera.