. . . I’d tell you I had another hectic week. I’ve barely had time to tweet or comment on blogs at all, and I’ve missed it. Diana stayed with me most of the week and we had a fabulous visit. Even though we communicate by chat several times a day, we don’t get enough face time. It was also the first week of little-people school, so my grandson had to start first grade this week. In addition, I was very busy with a work project that had to be finished this week, and I got it done.

. . . I’d’ tell you that I managed, despite being so busy, to publish two guest posts at Comparative Geeks this week. They’re about Frank Miller’s The Dark Knight Returns. I’m especially proud of the second post, which discusses the role of Superman in the story. The art layout for that post is just about the best job I’ve ever done with images on a blog.

. . . I’d tell you I’ve upgraded my technology, so my productivity should skyrocket over the next month or two. This is good. Otherwise, I doubt I’d be able to keep up the blogging through the fall. I picked

up this little gem a couple of weeks ago. It’s a Samsung Galaxy S4, and it replaces a prepaid analog phone I’ve been using for almost 10 years. It’s already indispensable. I have it set up to chirp like a bird when I get WordPress and Twitter notifications. The alert tone isn’t annoying at all. It’s actually a pleasant sound, so now, even when I’m occupied with work stuff and can’t look at my social media, I can tell how active my accounts are just from the notification alerts. I’ve also got it set up to synch to my computers, so I can plug in the USB cable and use the mouse and keyboard to operate the phone while it’s charging.

I’ve also picked up an extra laptop, thanks to Diana. For the last several months, the only computer I’ve had at home is a laptop that’s so badly damaged I can’t close the case, and I can only move it very carefully. Basically, it’s a desktop, and that means I’ve only been able to blog when I could find the time to close myself away in the home office.

This week Diana brought me a 5-year-old Dell Studio that she had custom built to gaming specs. The wireless card is dead, and the computer is so solid otherwise, it would be a shame to have someone crack it open. I picked up a USB wireless adapter for it and it works like a charm. It’s a little slow starting up, but once the first browser window is open, it’s as fast as my newer laptop and my work desktop. So now I have a computer I can take anywhere, and I can blog from my living room while I’m hanging with my family. This also means that when I’m working in the office and my grandson is around, he can have computer time without taking Vicki’s laptop.

Having a good second laptop allowed me to realign my office workspace. The external video port on my old laptop is so close to the crack in the case, I’ve been afraid to plug a monitor into it for fear that I would kill my only computer trying to get the plug in. Once I got the Dell set up, I pulled out a widescreen HD monitor that’s just been sitting since my last desktop died and risked plugging it in. Now my home office looks like this: 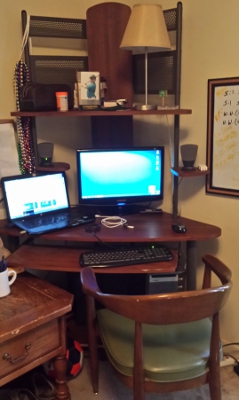 And let me tell you, the dual monitors are useful. Once upon a time I had a technical writing job and was provided with a laptop and an external monitor. I’ve wanted a setup like that at home ever since, and now I finally have one. The combination of the dual monitors and ability to synch the smartphone is powerful. Now I can blog on one monitor and have Tweetdeck running on the other, so when I take a 15-minute writing break, I can favorite and retweet things. It took less than 15 minutes with the combination of the phone’s cloud backup and my external hard drive to copy everything from the office computer to the Dell. I’ve finally got identical bookmarks in both of the browsers I use, and have my data backed up in enough places that I’m not living in fear of losing everything because a single machine goes down.

And I’d tell you I hope to be around more this week than I have been lately.  🙂 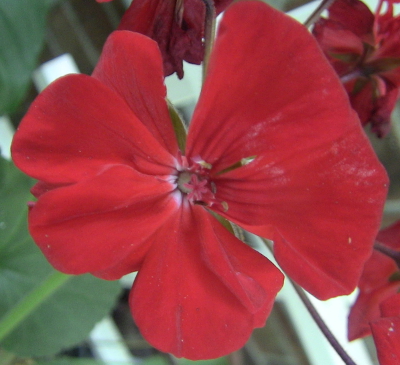