I’ve recommended a few other bands so far in my series on music, like The Lumineers and The Black Keys. Both of those bands have a simpler sort of sound, from a folk origin like with the former, or from just being two musicians with the latter. So how about a different sort of band?

Florence & the Machine. It sounds even from the name like it’s a large thing. The sort of band where you might expect a song called Cosmic Love. Theirs can be both a large sound, and can focus in and be all about the haunting vocals of the lead singer, Florence Welch. Also, they have a harp. 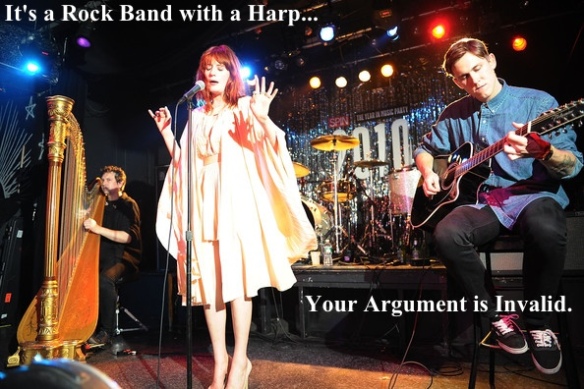 I thought I would share a bit of the fun of this band, and a few of their songs. The recent news is that they are working on a third studio album, but along with the first two, there are also deluxe editions and B-sides and live albums galore to choose from while you wait – plenty to check out!

What the songs are about, the lyrics and images and ideas, are part of what is so great. Some songs are full of images, full of ideas and things we would understand. Full of love and emotion and feeling.

Okay, and not Doctor Who references. Well, maybe… They are British…

I found that image a while ago on Tumblr, and lost the original provenance from where I found it, but it stuck with me. I love her intensity in the image used – it combines well with the lyrics and the song. I think intensity is a good word – thinking of songs like Kiss With a Fist or Girl With One Eye.

Along with strong images and intense songs, however, they also work with a lot of metaphorical and poetical language. I love it. And, as is fitting with the name of my series, I don’t understand it much at all.

How about a Vocal Duo?

I think sometimes, I just have to let the musicians speak for themselves. I would definitely recommend checking them out, checking out some of the songs I’ve linked and more. But for now, how about a vocal duo?

I love this cover of Jackson. It fits my observation that a lot of vocal duos happen as one-off songs, and this one is certainly an example of that. Nonetheless, it’s fun and I hope you enjoy it. For more Florence & the Machine, you can check them out on their YouTube channel:

I wouldn’t always recommend a first album as a starting place, but with Florence & the Machine I think it’s a good starting place – Lungs. The second album, Ceremonials, is good, but it does a lot with the backup singers and things and the band is maybe almost too large – it’s a good place go from there, but Lungs is the good place to start.

I’d love to see more thoughts in the comments below – where would you start with this band? Or if you don’t know them, what do you think?

@compgeeksdavid blogs at Sourcerer about music and comics. His main blog is Comparative Geeks — you can check out his other work there!