I just discovered Middle Earth News because they linked to my most recent Tolkien post from Part Time Monster last night. Thanks to Middle Earth News reporter Lily for including me in the report. You can also find lots of other yummy Middle Earth-related things in the article. For example, these retro-themed travel prints by Teacup Pirhana on Etsy, which are available individually or as a set. 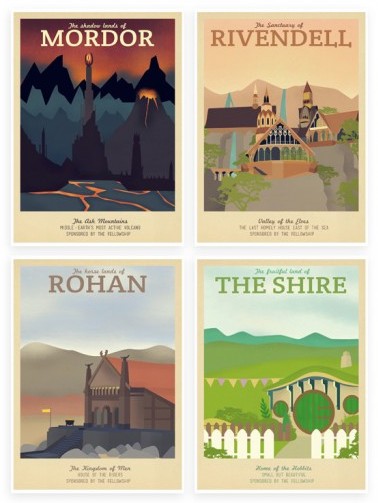 Middle Earth news has a ton of social media. You can find them on Facebook, Pinterest, Twitter, and Google Plus, among other places. Needless to say, I’m following them on every network where I have a presence. They also have a way for you to submit share-worthy Tolkien content for consideration. I’ll be submitting things from friends The Leather Library, A Tolkienist’s Perspective, and Sweating to Mordor to them from time to time, and I’m happy to find a way to interact with a larger community of Tolkien fans.

Now, a brief preview of the week ahead:

Thanks for reading, and have a marvelous weekend!