No Dorian this week, but we did get to some interesting moments with Frankenstein’s

firstborn. We also got our first view of the Guiginol (where they’re performing Sweeney Todd), which, given that the last episode of the season is to be titled “The Grand Guiginol,” is a significant moment. And we went to the London Zoo.

Much like the weeks before, the pacing of the show lingers in some places, speeds up in others. We’ve a scene longer than the seance scene, this one a 15 minute look at the Creature’s back-story. While that long-scene format worked, and worked well for the first two episodes, the pacing of this episode seemed off, somehow, not as well crafted as the previous two episodes. That 15 minute scene was a wonderful one, but it dwarfed other scenes in a not altogether positive way. Perhaps it was the length of time spent on a story that follows the Shelley novel fairly closely.

We still get the fairly gruesome death of a young, beautiful woman early into the show, though this time it isn’t at the hands of a monster. We open with a young Frankenstein looking for his dog, whom he discovers is dead;  the shot of the dog, whose corpse must’ve been there for a while, is probably one of the grosser shots in this episode, but there’s also a terrible beauty there, surrounded by green grass and life. We then move to a scene between Frankenstein and his mother. During a goodnight kiss and their recitation of Romantic poetry, she throws up quite a lot of blood. She lingers and dies presumably very shortly after. But at least the death doesn’t seem so pointless this time, story-wise: we now know why Frankenstein is so invested in finding that moment that separates life and death. We know he’s got mommy issues.

And then we’re drawn back to the moment at hand in the last part of the last episode—namely, the death of gentle Proteus at the hands of the Creature. We get another flashback,

The first, born in blood.

this time the lengthy one. We see a birth very different from that of Proteus. Where Proteus looked like a dead man sitting on a table, The Creature was bathed in blood, lying flat on a slab. Where Proteus was awakened by nature (symbolized by the lightning strike), The Creature was entirely brought about by mechanization. Whereas Proteus awoke peacefully (or seemed to), the Creature awoke screaming. And our young Frankenstein couldn’t bear to be confronted with that; he ran, turned and left his creation where it was born and didn’t return. So now we know that the Creature has creator issues, too.

But the Creature (and Rory Kinnear acts this beautifully) learns language from the Romantic poetry that Frankenstein has left behind. I kinda wish we weren’t beaten so hard over the head with the Frankenstein’s monster=modernity stick here, but it makes for good TV. The creature learns about work and about animals and about society through an upstairs window. Eventually, of course, he ventures out–and is promptly beaten for his appearance. Vincent

(Alun Armstrong), a theater artisan, reaches out to the Creature and provides him with a space to live in, a job, and a name. The Creature becomes Caliban, named (as his brother) for a Shakespearean character. And get this–he works in the theatre, The Grand Guiginol (for which, aforementioned, the final episode is titled); he lives there, too. Could our Caliban/Creature also be the Phantom of the Opera? Or maybe this is how we’re going to re-inject Dorian into the story, given his proclivity for the theater.

The theater also makes for great moments of meta-commentary.

Anyway, what Caliban wants is, of course, a wife. This is much like Shelley’s story, in which the monster tracks down the doctor to secure a mate. And I’m wondering if our consumptive, Brona, is going to wind up as the stand-in for Frankenstein’s mommy issues, the monster’s need of a wife, and Chandler’s troubled past.

Speaking of Chandler, he and the rest of the crew show up for the last 15/20 minutes of the episode, and we have a bit of a mad dash to the end. Vanessa sees Mina in a vision, and we’re treated to Mina’s back-story-by-proxy: she’s engaged to Jonathan Harker but has had an -ahem- fascination with another individual, and he has taken her. So we go to the zoo, and Chandler manages to tame a wolf with the trick of Sticking his Hand in its Mouth after Looking at It with Scrunched up Eyes. Perhaps this means that he is a werewolf after all? Maybe. Part of me hopes we don’t need to bring werewolves into this season. 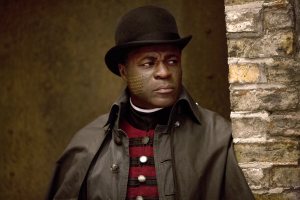 But he needs more lines and a real story, writers.

Either way, the group captures a servant of the vampire who has Mina and take him back to Murray’s home, where he is chained in what I think is the basement.  Fenton (Olly Alexander), as he calls himself (was hoping this was going to be Renfield, really), raves about the Hidden Ones and Amunet/Amun-Ra for a bit before being pretty badly beaten by Murray.And the decision must be made, of course, as to What To Do With the Person/Vampire/Creature We Chained Up. The group decides on a blood transfusion in an attempt to cure Fenton, hoping that if it works they can use it on Mina when she’s found.

So then our little League promises fealty, Vanessa calls Malcolm on a little of his bullshit in using her as bait, and Frankenstein reminds everyone that they are responsible for the creature and what he becomes from the moment they begin to change him.

But I wonder if Frankenstein realizes that they’ve already begun to change this creature? Perhaps not—if this episode teaches us anything about Frankenstein, it is that he is still very much incapable dealing with the ways that he is responsible for what has happened to others–even when he created  them. 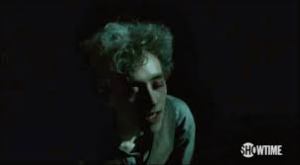