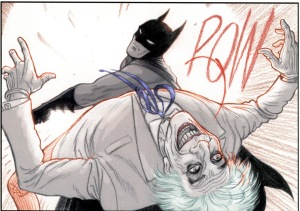 Happy new book day, everyone! I hope you’re all doing well. This week, I’d like to keep looking at real people through the lens of Batman. This time, I have chosen another martial artist, but of a different sort—Imi Lichtenfeld (or Imi Sde’Or, 1910-1998).

Imi Lichtenfeld was born and lived in the then Czechoslovakian capital of Bratislava. He remained there until 1940, at which point it had been under German occupation for several

years. He was the son of a police officer, jujitsu master, and circus performer, and he eventually went on to create the martial art called Krav Maga, which is considered one of the deadliest fighting styles ever devised and is practiced to this day by the Israeli Defense Force.

Several things here make me think of Batman when I read about Imi Lichtenfeld. He was trained in boxing, wrestling, Eastern martial arts, and gymnastics at a young age by a father who was also familiar with acrobatics and strongman techniques from his years as a circus performer. All of this contributed to the form of his fighting style. But what of its substance and philosophy?

This line of questioning points me to more information that makes Lichtenfeld look more and more like a real-life analog of Batman. During the German occupation of Bratislava and other cities, Nazi Brownshirts and other zealots of the cause would go out at night to harass Jews and vandalize Jewish businesses. Lichtenfeld and his friends would go out at night themselves to protect their neighborhoods through some righteous vigilantism.

Lichtenfeld spoke of these experiences in a People Magazine interview in 1976, saying “When the Hitler youth gangs used to single out Jewish young men on the streets, it was either hit or run. I found the hitting more satisfying.” Further, where there is a spiritual element to Eastern martial arts, even a sort of pacifism at times. Lichtenfeld created Krav Maga around a single principle—break your opponent quickly and completely.

This was the environment that led Lichtenfeld to flee his homeland in 1940. He then ended up on an adventurous Mediterranean crossing that lasted two years and fought for British special forces in North Africa. He remained in Palestine after the war and fought for the establishment of the state of Israel in 1948.

He remained in the IDF for 15 years, and his primary occupation during that time was teaching fellow soldiers Krav Maga. After entering civilian life in 1963, he worked toward reshaping his fighting style to be less outright deadly so he could teach it more broadly. Lichtenfeld eventually established schools in Tel Aviv and Netanya, Israel. Most of the rest of his life was spent perfecting his art.

Many creators who have had some hand in Batman’s development like to think far into the character’s future, beyond their own time writing him, to imagine how their version of Batman will live years and decades hence. One example is the legendary Denny O’Neil, who wrote Batman in the 1960s and 1970s. He believed that his version of Batman would fight the good fight for many years, then settle down into a comfortable retirement from which he could shape and train the next generation to take up his mission. I can see many of these  disparate threads weaving themselves together in Imi Lichtenfeld’s, life as well. Lichtenfeld was O’Neil’s Batman made flesh.

What do you think of this entry in the Batman column? Would you like to see me pursue this project for a few more posts?  Let me know in the comments below or tweet me @quaintjeremy.

My numerous comic picks for this week:

Thanks for reading! See you here next week. Same Bat-time, same Bat-channel.

2 thoughts on “Real People Through The Lens of Batman: Imi Lichtenfeld”