Alright, I’ll admit it…I’m already addicted to Penny Dreadful. Yes, I love Victorian period pieces, and as I mentioned last week in my review of “Night Work,” I am very, very fond of monsters. One of the reasons I chose the title of my blog is because I am so very many things, all cobbled together like Frankenstein’s monster. It is no coincidence that the OED lists the etymology of the word “monster” as “monere,” which means “to warn.” Monsters are here to show us things; they are here because we need them, even when we must construct elaborate hoaxes. Our monsters reflect something: they warn us of our shortcomings and remind us of our fears while allowing us to escape from the confines of what we know. 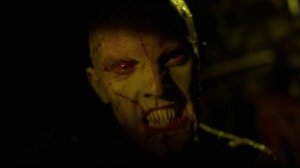 And speaking of what we know…One of the reasons that the Victorian period is so fascinating is that it was full of developments, particularly scientific and technological. Daguerreotypes were introduced in 1839, and by 1889, we had handheld cameras. Postage stamps were introduced, and the postage industry was standardized in a way that it had not been. Steam power made international trade and travel more possible than ever before. Anesthetics began to be used in medicine. New understandings of how diseases spread led to developments in surgical techniques, disease treatment, and sanitation. These developments created a world in which belief, suspicion, and science co-existed.

And the uneasiness of this co-existence led to some of the great stories we have now. In fact, one of the markers of Gothic fiction is ambivalence concerning technological and scientific advances. Frankenstein is concerned with creating life. In a notable scene from Stoker’s Dracula, Lucy has to receive a blood transfusion, and she gets blood from three different men. Conversations between the characters about these transfusions suggest discomfort with the idea of mixing blood (it is suggested that she is thrice married as she is blood-bonded to three men). Again, our monsters reflect something.

And monsters on Penny Dreadful abound, but they’re not always where we think they’re going to be.  (Warning: Spoilers below the cut.)

“Seance” doesn’t give us anymore vampires, but it does give us a few all-new monsters. We start the episode with the slaying of another woman, this time in a park. We get more whispers about whether Jack the Ripper is back, but know all too well that this is Something Else. Whatever it might be, it isn’t human–at least not entirely.

We then see Ethan wake up by the docks, hands cut to shreds, and he seems to have no memory of getting there. I don’t know what to make of that—and the show hasn’t explained it yet. He goes into a nearby lodging house/pub, buys a bottle of whiskey, and promptly begins to drink away whatever smidgens of memory he has left. There he meets Brona Croft (Billie Piper), a consumptive Irish prostitute (Can we get a Victorian prostitute who isn’t Rippere-ed or consumptive? Rare literary commodities, those).

We then see Brona with Dorian Gray (Reeve Carney), who is just as beautiful and bizarre as I imagined him. Dorian has hired Brona as a model and is having her photographed. Things get weird when she begins coughing blood. Dorian seems transfixed by the blood, and the two share one of the must unnerving sex scenes I’ve seen in a while (Brona: coughs blood into Dorian’s face/ Dorian: I’ve never fucked a dying creature before).

And then we come to the seance. The Egyptologist insists that Malcolm and Vanessa attend a party before he will translate the photos of the dead vampire’s exoskeleton; while there, Vanessa meets Dorian. He has a marked effect on her, though I can’t really tell what the effect is. A mutual fascination, it seems. In a ten minute scene, Vanessa is possessed by something—we’re not entirely sure what. Ten minutes is a very large portion of a show that runs just under an hour, but every second of the scene is riveting–and the slow pacing is one of the things that really works for this show, I think.

The group is drawn around a table as Madam Kali, celebrated medium, begins a seance. But whatever the seance is intended to do, its main accomplishment is to awaken whatever’s in Vanessa. The first voice we hear seems to be Malcolm’s young son, who had dysentery (and died of it) when his Malcolm left him behind on an expedition; the second is clearly a demonic figure, something very old and very nasty, and it accuses Malcolm of incestuous thoughts about Mina and of sex with someone, though it’s vaguely worded, and so that could be either Mina or Vanessa. There’s a whole lot of creepy in this scene, and Eva Green is really proving herself to be the powerhouse of this show. 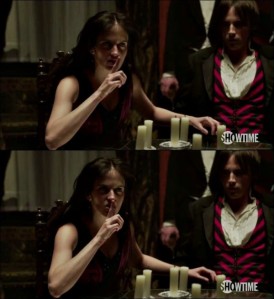 The Egytologist translates the images, and they’re an apocalyptic foretelling. If Amunet, an Egyptian deity (and what might very well be possessing Vanessa), partners with Amun-Ra, her counterpart, they will release something horrible. The Hidden Ones, our Egyptologist tells us. He also tells us that Amun-Ra is said to have gained eternal life by feeding on the souls of others. It seems we’ll have a definite Egyptian bent to this season, which could get really interesting.

And then we see Victor Frankenstein and Proteus, the reanimated man (Alex Price). We expect this to be our monster. But Proteus is meek, and he’s curious. Those first gentle, confusing moments that transfixed us in the first episode foretell pretty clearly how he’ll relate to Frankenstein and the world at large. He’s also obviously a full corpse, not someone pieced together from several bodies, and so he doesn’t fit the mold of Frankenstein’s monster. As he begins to wander about London with Victor, he begins to remember that he was alive. He remembers boats best–and begins to call out the types loudly as he stands at the docks. I wanted to cheer for him. Price’s performance is phenomenal–and it gets even more so when he remembers “wife.” And then he doesn’t know what he is. But Victor and Proteus go home together, and the moment is bittersweet.

And then we come to the end. A fast, gruesome, heartrending minute of TV. Proteus is split in half by Something. And then this Something (Rory Kinnear) calls Frankenstein “father.”

Ahhhhhhhhh! Monsters, monsters, everywhere. And I can’t wait until next week.

Goodbye, Proteus, we barely knew you.