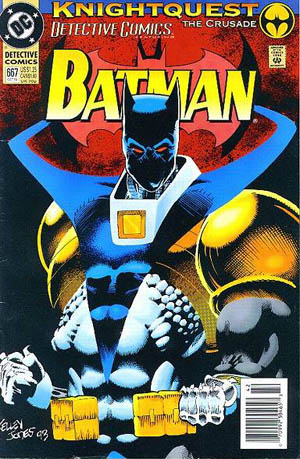 Happy new book day, everyone! I thought for today we could look at another one of the heirs to the Batman mantle. Pretty much everyone who read comics in the 90s knows (and likely loathes) the character I want to focus on today—Jean-Paul Valley, better known as Azrael.

The 90s were a dark and twisted time in comics. Books like Watchmen and The Dark Knight Returns had been released just a few short years earlier and the industry was still reeling in their wake. However else fans chose to read these books, their dark turn is what stuck around the longest; death, violence, distrust of authority, and loss of identity became some of the most recognizable tropes of the decade’s superhero stories. This is the era that saw the founding of Image Comics, but that also saw many established characters in Marvel and DC broken in various ways. At DC, Superman and Oliver Queen were dead, Hal Jordan was an insane mass-murderer with godlike powers, and Batman had been thoroughly defeated and paralyzed by a new enemy called Bane.

The 90s demanded edgier replacements for these characters, and Batman’s was Azrael, a convoluted assassin/religious zealot named after the angel of death and trained in detective work by Batman himself. Originally created in 1992 by Denny O’Neil and Joe Quesada (who later became Editor-in-Chief of Marvel), Azrael was presented as a sort of parody of how dark comics had become—he was far angrier and much more brutal than Bruce Wayne ever was. He even crossed well established lines and allowed criminals and their victims alike to die. And the fans seemed to love him, at least for awhile.

Eventually, Bruce Wayne’s injuries were healed and he successfully faced off with Azrael to reclaim his identity as Batman. It is somewhat sobering to think of how differently things could have gone, though. Rumors have persisted in the years since that DC had considered making the replacement permanent, and Azrael’s methods Batman’s new status quo. That certainly would have changed comics forever after.

There is a bit more to be gained from looking more deeply into Azrael’s characterization, however. Being the heir to his role as assassin, his strong connection to technology (he pursues a computer science degree and builds a suit of power armor when he becomes Batman), and his years of unconscious programming from an entity called simply the System all succeed in making Azrael a sad shell of a character in my opinion. In his inheritance of his legacy as a killer, coupled with his programming, Azrael has little true agency; he is simply the tool of a massive, faceless organization seeking to control the world. That and his aspirations of technological prowess make him little more than a pawn in the games of the computer-obsessed corporations of the 90s—a reality shattered by the implosion of the Dot Com bubble in the early 2000s. In these ways, from fears of assimilation and loss of freedom to his reliance on the edifices of the doomed greed of the 80s and 90s, Azrael is definitely a product of his era and should remain there.

Do you agree or disagree with my assessment? Do you have fond memories of Azrael? Let me know your thoughts below! Tweet me @quaintjeremy.

My comic picks for this week: