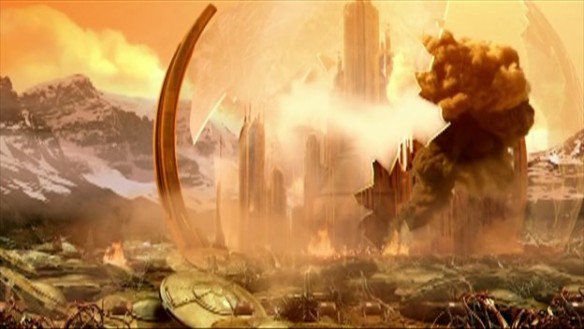 Doctor Who is a science-fiction adventure story. The Doctor travels through time and space with a Companion. The Doctor is a Time Lord, who are extinct at the beginning of the new series. The Companion is always human, usually female, and acts as the audience’s gateway to enjoying the adventures of the bizarre and inhuman Doctor. The Doctor is a mythic figure to both the audience and the in-series universe. Few subjects, either in-universe or in the real world, contribute to the myth of “the Doctor” like The Last Great Time War.

The Doctor divulges little about his past, but hints at a dark time he is trying to leave behind him. He calls it the “Time War.” The Time War was between the Time Lords  and the Daleks (omnicidal maniacs), both incredibly powerful and capable of time-travel. The war spiralled out of control, and the Time Lords decided to save themselves by transcending the universe and destroying it. The Doctor obtained a great destructive force called the “Moment” and used it to end the war. He killed everyone and time-locked the war. For a more in-depth rundown, read here.